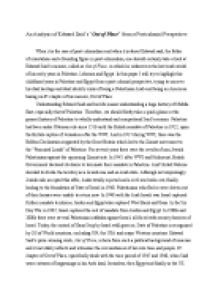 ﻿An Analysis of Edward Said?s ?Out of Place? from a Postcolonial Perspective When it is the case of post colonialism and when it is about Edward said, the father of orientalism and a founding figure in post colonialism, one should certainly take a look at Edward Said?s memoir, called as Out of Place, in which he rediscovers the lost Arab world of his early years in Palestine, Lebanon and Egypt. In this paper I will try to highlight his childhood years in Palestine and Egypt from a post colonial perspective, trying to uncover his dual heritage and dual identity crisis of being a Palestinian Arab and being an American basing on 6th chapter of his memoir, Out of Place. Understanding Edward Said and his life means understanding a huge history of Middle East, especially that of Palestine. Therefore, we should firstly take a quick glance at the general history of Palestine to wholly understand and comprehend Said?s memoir. Palestine had been under Ottoman rule since 1516 until the British mandate of Palestine in 1922, upon the British capture of Jerusalem after the WWI. And in 1917 during WWI, there was the Belfour Declaration supported by the Great Britain which led to the Zionist movement to the ?Promised Lands? of Palestine. For several years there were the revolts of non-Jewish Palestinians against the upcoming Zionist acts. ...read more.

It was a all-male English school, in which every student was familiar to Said and therefore, he felt himself at home in his college years. His teachers were mostly British and his classmates were both Christian and Muslim students. For the education he got in the college he recounts that ?the academic offering made no remark on me; an indifferent teaching, a general sense of purposeless routine trying to maintain itself as the country?s identity was undergoing irrevocably change. With the foundation of Israel and the end of British Mandate most places of Palestine became a province of Israel and therefore the unrest prevailed everywhere. Many people were driven out of their houses or they intentionally moved from Palestine to other ?safer? places like Said?s family. In his memoir Said recounts how his aunt, cousins and many other middle class relatives become miserable refugees away from their motherlands. About the issue he tells that ? It is still hard for me to accept the fact that the very quarters of the city in which I was born, lived and felt at home were taken over by Polish, German and American immigrants who conquered the city and have made it the unique symbol of their sovereignty, with no place for Palestinian life, which seems to have been confined to the Eastern city, which I hardly know.? Throughout the book, said inescapably makes comparisons between his previous city Jerusalem and his refugee city Cairo. ...read more.

When Said was 13, in 1948, he and his family went to the US due to family battles intensifying, the political situation worsening and the health of Said?s father worsening. When Said arrived in New York City, he was stunned by the ?modern? way of life he faced. While his father had illness treatments at an New York Hospital, Said was sent to a summer camp in Maine for a month. At the camp he felt himself as a shameful outsider. Nationality, background, real origins, past actions all seemed to be sources of his problem; he could not lay the ghosts of past that haunt on him from school to school, from city to city. So, beginning in the US, he find the solution in living as if he was a simple, transparent soul in not speaking about his family and origins unless necessary. He found the solution in turning into the ?others?. After Said returned to the US and stayed there ever since, he had a sharp disconnection about relationship with Israel. Said criticizes those who attack on the US due to its support of Israel, yet still who goes on their business relations with Us or who still send their children to American Colleges. The remoteness of Palestine, his family?s silence about its role, the long disappearance of Palestinians from his life, repressed, undiscussed Palestinian issue and politics, his discommunication with Palestinians in his eleven years American life made his American life to be in a distance from Palestine. ...read more.