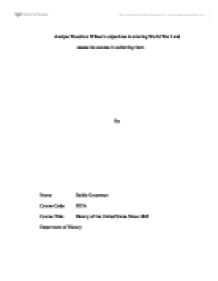 Analyse Woodrow Wilson's objectives in entering World War I and assess his success in achieving them. By Name: Dahlia Grosvenor Course Code: H22A Course Title: History of the United States Since 1865 Department of History In World War I, 1914 - 1920, the United States of America was originally a neutral power. In this respect, it became solely their decision to enter the war or not. "Virtually all Americans favored neutrality in 1914; keeping out of Europe's quarrels had been a hallowed tradition."1 In its early stages the war was fought between Germany and Austria-Hungary (known as the Central Powers) and Belgium, Great Britain, France, Russia, and Serbia (known as the Allies). As the war continued, the Central Powers were joined by Turkey and Bulgaria; the Allies were actively assisted by Greece, Italy, Japan, Montenegro, Portugal, Rumania, and after a period of time, the United States joined the war in 1917. The United States entered the war under President Woodrow Wilson, after many efforts to remain neutral had been exhausted. President Woodrow Wilson believed that war was being forced on them by the Germans. Events in early 1917 occurred in such a way as to undermine American neutrality. The breaking of the 'Sussex'2 pledge by Germany, the Zimmermann telegram3 and the sinking of unarmed American merchant ships, caused President Wilson to declare war on the side of the Allies. The reasons for this declaration outlined American war aims in what were called the "Fourteen Points". ...read more.

The resulting Treaty turned into an attempt by the Allies to make the world better for themselves. President Wilson, though unable to obtain complete agreement from the Allies, was able to achieve some success of the fourteen points. He was able to get the map of Europe redrawn nearer to the principle of self determination of the colonial population, by inducing Clemenceau to abandon his claim to the left of the Rhine. He had to agree however, to a treaty which said that Great Britain and the United States would come to France's aid in the event of unprovoked German aggression. This treaty was never ratified. He was also able to incorporate the League of Nations as an integral part of the peace treaty and there was nothing more important than this to him. Unfortunately, Wilson had to make concessions before he could secure an agreement on the League. He yielded to the demand of huge reparations from Germany for both France and Britain and yielded to some territorial arrangements, in which Italy acquired the Austrian Tyrol and Japan the Chinese province of Shantung. This went completely against the principles of self determination and through this principle the Allies obtained the control they needed to take possession of Germany's former colonies, though President Wilson was able to prevent this from happening in an overt manner. In this way president Wilson was able to secure a settlement in accordance with the fourteen points. Without Wilson's influence, the Treaty of Versailles would not have even accommodated the League Covenant. ...read more.

The point about freedom of the seas had been jeopardized early on as Wilson conceded reservation on this point as the Allies had wanted. Wilson's second great success came in his ability to have the League of Nations incorporated into the peace treaty. In formulating the Versailles Treaty, however, the Republicans demanded modifications which weakened the League Covenant. It now provided for a withdrawal from the League and made the mandates of the Covenant optional. This sent the message that the member states would not have to what the Covenant mandated and that when they were ready to leave they could. It becomes almost difficult to measure Wilson's success in his objectives. The success of President Wilson's objectives in entering World War I was quite marginal. Although he was finally able to secure an agreement between the Allies and the Central Powers in accordance to the majority of the fourteen points, he did so at great cost to the principles underlying them. He was a visionary, whose fourteen points lead to the creation of a League of Nations and League Covenant. He was a visionary who saw the ingredients needed for a lasting peace. He was not entirely successful because he allowed the principles of his vision to be compromised by the Allies, though under the circumstances it would have been impossible to prevent. He conceded to too many of his points in order to push ones which he deemed to be most important but this weakened his vision overall. Wilson warned in vain against the principle of a harsh peace and many historians believe this was the cause of German vengeance in the 2nd World War. ...read more.