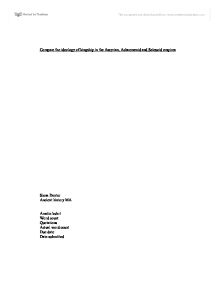 Compare the ideology of kingship in the Assyrian, Achaemenid and Seleucid empires

Compare the ideology of kingship in the Assyrian, Achaemenid and Seleucid empires Siena Dexter Ancient history MA Amelie kuhrt Word count Quotations Actual word count Due date Date submitted The first millennium BC saw three genealogically distinct Empires rise from relative obscurity to create their legacy in the ancient near east. Maintaining effective control over a multitude of religiously and culturally diverse nations was a skill that Assyrian, Achaemenid and Seleucids empires attempted to master. Wielding the weapon of fear over conquered lands is only effective to a certain degree. However, installing a system of ideological control, where the ruler is respected and even worshipped, increases chances of long term success. This essay will compare how this ideological control (or ideology of kingship) worked within the three empires; the topic will be divided into two parts. First I will discuss the king's religious position within the empire: his 'relationship' with god and how (if at all) religion was used to establish his supremacy. Next, I will discuss the king and his subjects: whether religious and cultural toleration was practiced as well as the extent to which the king acted as religious leader to multiple nations. I am interested to see if 'newcomers' merely overtook the ideology of their predecessors, which seems like the easy option or had their own ideological agenda to pursue. The king and god Both Assyrian and Achaemenid empires propagated that the king was a close partner of god. Both recognized that whilst the king was human and part of god's creation, he was especially selected by god to perform a role and as such his word was law. An Assyrian relief proclaims; Ashur is king- indeed Ashur is king! Ashurbanipal is the [representative] of Ashur, the creation of his hands.1 Similarly, the king's triumph as a conqueror and ruler over his empire was also in the hands of the gods "may Shamash, king of heaven and earth, elevate you to sheperdship over the four regions! ...read more.

The following extract from the Babylonian chronicle shows worship of Seleucid king being integrated into religious ceremony. "that month (nisan), on the 8th, king Antiochus and the [...] went out from the palace to the gate ... of esaglia ... [...] of esaglia he made. Offerings (?) [...] Marduk-etir... [...] of their descendants (?) were set, entered the akitu- temple [...] made [sacrifices for] Ishtar of Babylon and the life of King Antiochus [...]14 King and subjects In the previous section we saw repeated continuities in the religious belief systems of the Assyrian and Achaemenid Empires. In both, god was supreme leader especially selecting the king, who was militarily and judicially talented as well as genealogically legitimate, for his role. This section sees the Achaemenids align closely with the ideology of its successors, leaving the Assyrian empire alone amongst the three in their drive for ethnocentricity. Assyrians believed they were the only legitimate world leaders and by the will of Ashur were exercised legitimate domination over their subjects. "give our lord Ashurbanipal... leadership over (all other) kings" 15 The king fought wars as a religious duty, reliefs tell of the king going to war in response to an actual or imagined threat. Assyrians saw themselves as defendors rather then aggressors; "Assur and the great gods, who magnify my sovereignty, who granted as my lot power and strength, commanded me to extend the borders of their lands. They placed in my hands their mighty weapons, deluge in battle. I gained control over lands, mountains, towns and princes, who were hostile to Assur and I subdued their districts". 16 Liverani explains that Assyrian ideology sees the world in a series of polarized oppositions: Inner Vs. outer space Known Vs. unknown Light Vs. dark Productive Vs. sterile He explains that Assyrians waged a 'holy war' assimilating the perishable chaos of unknown lands into their clear, straight and solid world. ...read more.

Achaemenids on the other hand whilst also believing themselves to be the legitimate rulers of the empire and like the Assyrians before them collected tribute from their subject countries, celebrated the cultural diversity that existed in the empire and did not attempt to stamp it out. The defeat of the Persian army at the battle of Isis (333 B.C) brought with it a change of ruler but not a change in Ideology. Alexander sought to establish ideological continuity with his Persian predecessors. The early Seleucids, like Alexander supported local cults, participated in religious ceremonies and actively encouraged the worship of local gods. In Babylonia the bestowal of Nebukenzzers garment on Antiochus31 shows that Seleucid kings were accepted as legitimate successors of previous Babylonian kings. Seleucid participation in local religious festivals saw them given the status of religious figures. Whether intentionally or not, Seleucid kings became close partners of god and legends of their extraordinary physical prowess elevated them to an almost superhuman status of the kind that Achaemenid and Assyrian kings enjoyed. Though change is inevitable between the three chronological empires, it is interesting that many continuities exist as well. Each succeeding empire attempts to be better then its predecessors, to bring order or better culture to a failing regime. But each also recognized the benefits of learning from the past, adapting and improving. Figures: Fig A round-topped vertical stela found at Kurkh, Turkey, 1861. Shows the Assyrian King Shalmaneser III facing the symbols of four gods. Fig B Steal depicting Ashurbanipal facing the symbols of the four gods Note on symbols: The five symbols depicted here are as follows: Ishtar The second symbol resembles that the staff of Adad: it represents lightning and thunder. Sin the moon god Assur Fig C Jeho Panel From the Black obelisk of Shalmenser III, Calah, 1946. The Israelite King Jeho bows down to Shalmenser III whilst bringing tribute to him. The symbols of two gods are visible above the king. In the British museum Fig D The Seal of Darius, 500 BC Fig E Orinst P 58722 Naqs- I- Rustam, Iran. Tomb Of Xerxes. ...read more.