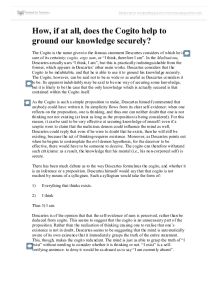 How, if at all, does the Cogito help to ground our knowledge securely?

How, if at all, does the Cogito help to ground our knowledge securely? The Cogito is the name given to the famous statement Descartes considers of which he is sure of its certainty: cogito, ergo sum, or "I think, therefore I am". In the Meditations, Descartes actually uses "I think, I am", but this is practically indistinguishable from the former, which appears in Descartes' other main works. Descartes considers that the Cogito to be indubitable, and that he is able to use it to ground his knowledge securely. The Cogito, however, can be said not to be as wide or as useful as Descartes considers it to be. Its apparent indubitably may be said to be one way of securing some knowledge, but it is likely to be the case that the only knowledge which is actually secured is that contained within the Cogito itself. As the Cogito is such a simple proposition to make, Descartes himself commented that anybody could have written it. Its simplicity flows from its clear self-evidence: when one reflects on the proposition, one is thinking, and thus one can neither doubt that one is not thinking nor not existing (at least as long as the proposition is being considered). ...read more.

The use of the verb "seem", though, implies thought, thus this formation would be adding nothing new to the original form of the cogito. Again, though, one can only be sure of the fact that one is thinking and existing - nothing more can be drawn from it. Descartes is implying that the conclusion is intuitively known from the premise, thus there is just one mental act which comprehends it all. However, to say that one intuits one's knowledge of one's mental self, and then infers from this that one exists, whilst denying that one flows from the other (they are all understood immediately) seem to be contradictory. To say that by thinking, one automatically recognises one's existence is to suggest "therefore I exist" is a conclusion to the syllogism described above. The only alternative is to suggest that there is an innate knowledge of one's existence inside everyone, and that it reveals itself through mental processes: this, too, whilst providing a secure base for knowledge does not avoid inferences. Part of the way the cogito achieves this degree of surety regarding our knowledge is its reliance on the mind being transparent to the individual. Descartes' method involves the need for introspection. Markie has commented that, when one does this, one is not aware that one is thinking, but rather that there is thought. ...read more.

Descartes maintains that he can only be certain of things which he can clearly and distinctly perceive. Although he never asserts that he clearly and distinctly perceives his ability to think, and thus his existence, he says he is certain of it, which, following Descartes' method, suggests that he does clearly and distinctly perceive it. But by the Third Meditation this has been called in to doubt when he maintains that, prior to assuring oneself of the existence of God, even clear and distinct perceptions are open to manipulation by the malicious deceiver. Descartes appears to be asserting that an atheist would therefore have nothing to rest his own clear and distinct perception of his existence on, thus it would not be certain. If Descartes himself is therefore taken as a guide, until one is assured of the existence of God, even the cogito is in doubt, which means that by his own standards he has not secured knowledge of himself. Even so, the cogito still does not securely ground knowledge. As has been discussed, it merely secures a ground for knowing that the experiences one has in one's minds are in fact occurring in one's mind. Nothing more can be obtained from it, and so to claim that it is the basis of all knowledge and certainty is fallacious. [1] By which is meant the non-R.E.M, non-dreaming stages ...read more.

This essay is to be praised for clear expression and getting to the point reasonably quickly. Most of the discussion is also reasonably well focused on the question. The discussion of Descartes' views is mostly accurate. The essay also attempts to offer a conclusion which addresses the question, which is an absolute necessity for scoring good marks. There are a couple of appropriate references to philosophical commentators though these would benefit from more development and clarity. In particular, it is not clear that the writer fully understands the views of the philosophers he cites, which are pretty much stated without discussion.