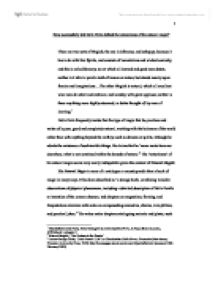 How successfully did Della Porta defend the naturalness of his natural magic?

How successfully did Della Porta defend the naturalness of his natural magic? There are two sorts of Magick; the one is infamous, and unhappy, because it has to do with foul Spirits, and consists of incantations and wicked curiosity; and this is called Sorcery; an art which all learned and good men detest; neither is it able to yield a truth of reason or nature, but stands merely upon fancies and imaginations... The other Magick is natural; which all excellent wise men do admit and embrace, and worship with great applause; neither is there any thing more highly esteemed, or better thought of, by men of learning.1 Della Porta frequently insists that the type of magic that he practices and writes of is pure, good and completely natural, working with the balances of the world rather than with anything beyond the earthly, such as demons or spirits, although he admits the existence of such terrible things. He claims that he 'never wrote here nor elsewhere, what is not contained within the bounds of nature.'2 The 'naturalness' of his natural magic seems very nearly indisputable given the content of Natural Magick. His Natural Magic is more of a catalogue or encyclopaedia than a book of magic in many ways. It has been described as 'a strange book, combining valuable observations of physical phenomena, including a detailed description of Della Porta's re-invention of the camera obscura, and chapters on magnetism, farming, and Empedoclean atomism with ...read more.

He asks 'the grate and good God'16 to forgive a man for claiming that Della Porta, was in fact, a sorcerer, saying that to ask the mercy of God for others was what was correct for 'a noble and Christian man to do'17 he claims in his chapter entitled 'The Instruction of a Magician, and What Manner of Man a Magician Ought To Be' that those who practised magic did so as a God-given gift: 'that God may seem to have made them hereunto.'18 The existence of God, and the omnipotence of God is reiterated many times thought the first book: that which is considered 'most excellent' by Della Porta, that which Plato calls the Form, he says to come from 'a most excellent place; even immediately from the highest heavens, they receiving it from the intelligence's, and there from God himself'19. If this is magic, then, Della Porta states, it is magic which is endorsed by God. 'It comes from the Elements, from Heaven, from the intelligences, yes, from God himself'20 Whilst, as previously stated, Della Porta's Natural Magick is, for the large part, a compendium of knowledge, the first book deals with the theory of the 'magick' itself. Even, or perhaps especially, his preface and first book are concerned with dispelling any notion that he was involved with that magic 'which all learned and good men detest,'21 and warns the reader that it is only those who would be jealous of his ...read more.

as the entirety of the text is perhaps a volume of knowledge passed down through generations, and so something of a 'secret recipe' to those who knew, demonic magic is not present. Evil spirits are not mentioned, except to assure the reader that the knowledge within the books has no bearing upon the spirit world, merely the natural one. Della Porta would have us know that the natural world, and the magic within it, is brought about by God, and as such, the secrets of nature, are, in fact, good and Godly: And by this means he, being as it were the servant of Nature, does extract her hidden secrets, and bring them to light, so far as he has found the true by his own daily experience, that so all men my love, and praise, and honour the almighty power of God, who has thus wonderfully framed and disposed all things.31 What there is, then of magic, is far more a selection of knowledge which could indeed be considered occult, as Della Porta is so keen to point out that this learning is, in fact, secret until now, and that the reader is in a privileged position to be viewing these long- kept secrets. These secrets, however for the most part, consist of recipes for simples and methods of cooking game, and that which could be considered less mundane, such as his book on the load-stone, do treat entirely on the natural world. ...read more.