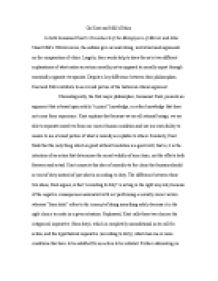 In both Immanuel Kants Groundwork of the Metaphysics of Morals and John Stuart Mills Utilitarianism, the authors give several strong, well structured arguments on the composition of ethics.

﻿On Kant and Mill?s Ethics In both Immanuel Kant?s Groundwork of the Metaphysics of Morals and John Stuart Mill?s Utilitarianism, the authors give several strong, well structured arguments on the composition of ethics. Largely, their works help to draw focus to two different explanations of what makes an action morally just as opposed to morally unjust through essentially opposite viewpoints. Despite a key difference between their philosophies, Kant and Mill contribute to an overall picture of the historical ethical argument. Chronologically, the first major philosopher, Immanuel Kant, presents an argument that is based upon solely ?a priori? knowledge, or rather knowledge that does not come from experience. Kant explains that because we are all rational beings, we are able to separate ourselves from our current human condition and use our own ability to reason to see a broad picture of what is morally acceptable to others. Similarly, Kant finds that the only thing which is good without limitation is a good will; that is, it is the intention of an action that determines the moral validity of any claim, not the effects both foreseen and actual. Kant connects this idea of morality to the claim that humans should act out of duty instead of just what is according to duty. The difference between these two ideas, Kant argues, is that ?according to duty? is acting in the right way only because of the negative consequences associated with not performing a morally correct action whereas ?from duty? refers to the concept of doing something solely because it is the right choice to make in a given situation. ...read more.

Kant?s views are that all moral choices are equal as long as the intention is good. Yet, dreading doing something good and still doing it generally appears to be less morally worthy than doing something good because it is the right thing to do. However, the opposite could easily be said because it takes more maturity to do the dreaded action than doing something that you take pleasure in, so the verdict is still out on which is more worthy, or if there is even a difference in worth (Lecture, 1/32, 2/07). On the opposite side of the moral theory spectrum, John Stuart Mill?s concepts work on the basis of ?a posteriori? knowledge, which is knowledge that comes solely from experience ? a direct opposite of Kant?s line of thinking. Mill believes strongly in judging an action based upon its effects (commonly referred to as consequentialism). Through this line of thinking, Mill came upon a major contribution to the field of ethics, which is often simplified into the idea of utilitarianism, which is the concept of doing the greatest amount of good for the greatest amount of people. Mill also uses an idea called the greatest happiness principle; this rule ties the idea of doing good things for people to being equal to bringing happiness to people. Simply put, by doing the greatest amount of good for the greatest amount of people, you are in turn also creating the greatest amount of happiness through your good actions (Lecture, 1/30 ? 2/01). ...read more.

One last criticism of Mill comes from a point raised by Bernard Williams: our own personal values often will supersede those standards of morality put in place by Mill?s theories. Williams? example is that you have the choice of killing one person to save several other lives, or not doing anything and all of the people will be killed. Williams? argues that our internal values are often stronger; a person may be extremely opposed to killing any people, even for the sake of the other people who will die without intervention. This sense of values is similar to Kant?s theory about using a person as a means to an end; in this case, Kant would be opposed to Mill?s philosophy in this example. While this is true, because of the variability of values from person to person, a person may opt to kill one person to save the many because he or she personally finds it more respectable to use a utilitarian approach to the situation (Lecture, 2/06 ? 2/08). Overall, both Kant and Mill have strong arguments which have greatly impacted the discussion of ethics through the generations. Despite the many claims that both viewpoints have certain weak points, these theories have many strengths as well. It is in that light that both theories can be considered roughly equal ? where one philosophy drops off, the other generally picks up. Where there is a conflict, it is ultimately up to the person in a particular situation to use their ability to reason to choose the optimal choice between the competing ideas as no one idea can be totally wrong or totally right. ...read more.