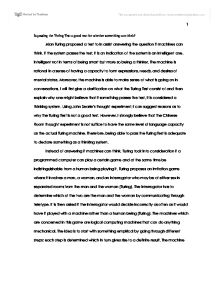 Is passing the Turing Test a good test for whether something can think? Alan Turing proposed a test to in assist answering the question if machines can think. If the system passes the test, it is an indication of the system is an intelligent one. Intelligent not in terms of being smart but more so being a thinker. The machine is rational in a sense of having a capacity to form expressions, needs, and desires of mental states. Moreover, the machine is able to make sense of what is going on in conversations. I will first give a clarification on what the Turing Test consist of and then explain why one might believe that if something passes the test, it is considered a thinking system. Using John Searle's thought experiment; I can suggest reasons as to why the Turing Test is not a good test. However, I strongly believe that the Chinese Room thought experiment is not suffice to have the same level of language capacity as the actual Turing machine. Therefore, being able to pass the Turing Test is adequate to declare something as a thinking system. Instead of answering if machines can think, Turing took into consideration if a programmed computer can play a certain game and at the same time be indistinguishable from a human being playing it. ...read more.

The Turing Machine does not know what the symbols mean, it treats them as manipulations because of their shapes and the output can be semantically interpretable. However, some might believe that one cannot simply observe the behaviour on the outside of the machine without knowing what is going on in the inside. To further illustrate, I will now use Searle's thought experiment, the Chinese Room, to suggest that there is a possibility of no thinking occurring inside a system that is able to pass the Turing Test. In the Chinese Room, Searle supposed that he was given a batch of Chinese writing in a room locked up and he has no understanding of the language Chinese at all (Searle). He then was given a second batch of Chinese writing along with rules in English, which he understands, to correlate the second batch with the original batch. This allows him to "correlate one set of formal symbols with another set of formal symbols, and all that 'formal' means here is that I can identify the symbols entirely by their shapes. (Searle)." He is then given a third batch with instructions, in English again, to correlate this batch with the first two batches. ...read more.

The Chinese Room experiment it is unable to have the exact language capacity, to keep up in a conversation, as the Turing Machine would have. If the man in the Chinese Room is asked to do a certain movement or to make a sound, he would be unable to because he lacks the knowledge of the Chinese language. Relying on syntactic alone does not make you a native Chinese speaker. The man inside must not only has an understanding of the words, but indeed the concepts. Hence, we cannot declare the man in the room a genuine Chinese speaker since he does not understand any of the content given to him. The Turing Machine would have such contact with the outside world for him to respond sufficiently in an ordinary conversation. This way, one can say that the machine does have something external, to us, which it maps onto. The Chinese Room objection is not sufficed to indicate that there is no thinking when the machine is manipulating the symbols. The man in the room does not understand the concepts in the Chinese Room; hence, not being able to be a real native speaker and would be unable to perform the same language capacity a Turing Machine would. Therefore, the Turing Test can be constituted as to whether a system is thinking. ...read more.