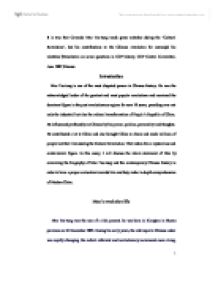 It is true that Comrade Mao Tse-tung made gross mistakes during the 'Cultural Revolution', but his contributions to the Chinese revolution far outweigh his mistakes.'[Resolution on some questions in CCP history, CCP Central Committee, June 1981]Discuss

It is true that Comrade Mao Tse-tung made gross mistakes during the 'Cultural Revolution', but his contributions to the Chinese revolution far outweigh his mistakes.'[Resolution on some questions in CCP history, CCP Central Committee, June 1981]Discuss Introduction Mao Tse-tung is one of the most disputed person in Chinese history. He was the acknowledged leader of the greatest and most popular revolutions and remained the dominant figure in the post revolutionary regime for near 30 years, presiding over not only the industrial but also the cultural transformation of People's Republic of China. He influenced profoundly on Chinese by his power, policies, personality and thoughts. He contributed a lot to China and also brought China to chaos and made millions of people lost their lives during the Cultural Revolution. That makes him a mysterious and controversial figure. In this essay, I will discuss the above statement of Mao by examining the biography of Mao Tse-tung and the contemporary Chinese history in order to have a proper evaluation towards him and help make in-depth comprehension of Modern China. Mao's revolution life Mao Tse-tung was the son of a rich peasant, he was born in Xiangtan in Hunan province on 26 December 1893. During his early years, the old imperial Chinese order was rapidly changing, the radical reformist and revolutionary movements were rising, and Western ideas and ideologies were introduced to undermine faith in traditional values and beliefs. Although the young Mao was affected by the traditional Chinese culture especially on poems and novels, he soon joined in the radical political and iconoclastic intellectual movements that swept Chinese cities. Mao published his first article in New Youth in 1917, A Study of Physical Culture, which is an attack on the Confucian It was a uniquely modern Chinese combination of nationalism and cultural iconoclasm that very much reflected the radical spirit of the times and one that was to remain a prominent feature of the Maoist vision. (Short 1999:pp19-81) In late 1918, Mao Tse-tung left Changsha for Beijing. ...read more.

China(4)from 1965 to his death in 1976,between the less privileged sectors under the new system and the emerging new ruling bureaucratic class in China. He urged the the Hunan peasants against the landlords and local warlords in preparation for the Northern Expedition in 1926;he called for national resistance to the Japanese invasion, through his pursuit of land reform in the late 1940s and early 1950s; his campaign against remnant 'capitalist' and 'rightists'in1957-1958 which played a crucial role in establishing the mood for the Great Leap and ending with the arousal of youth to attack the bureaucracy during the Cultural Revolution. 1949-1955,it is the time to establish the New Order-----land reform, the resist-America aid-Korea campaign, "Three-Anti, Five-Anti" campaigns, the patriotic health campaign, the local election campaign and the related national census, the campaign for the new marriage law and numerous others. This was an era of consolidating power and creating viable institutions.(Wilson 1977:P112) 1955-1959,Mao in command. An increasing state budget yielded sufficient revenues to undertake new economic development and welfare programmes...The bureaucracies were in place, centralized planning got underway and a state statistical network was grinding out reliable data on which Mao's associates and their bureaucratic subordinates made informed decisions .To bar over reliance on bureaucratic modes of policy implementation, Mao balanced the enhanced strength of the bureaucracies by continually launching campaigns in various realms. 1960-1965,weakened Time. The failure of the Great Leap, the creation of viable local institutions and the emergence of an entrenched bureaucracy rather swiftly altered the political landscape. Mao's associated fromYenan days began to move away from him---the ties between Mao hand his policy-specifiers weakened while the ties between them and the bureaucratic arenas became stronger. The fact is Mao's power was being curtailed through the emergence of a stable society. 1966-1969,the Cultural Revolution. Mao's intention Mao had a rational but audacious purpose: no firm answer, just left random scattered remarks and there are arguments on whether Mao wanted it to be a real revolution or it was just a mere purge? ...read more.