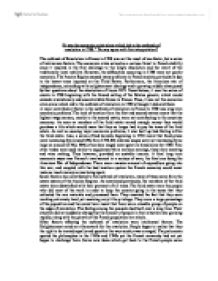 &quot;It was the economic crisis alone which led to the outbreak of revolution in 1789.&quot; Do you agree with this interpretation?

Their situation did not suddenly change but the amount of people in their situation was growing rapidly, along with the growth of the French population as a whole. Other factors affecting the outbreak of revolution were intellectual factors. The Enlightenment acted as a framework for the revolution. People began to realise that they the right to be treated equally and question the way society was arranged. The parlements quoted the philosophes in the 1760s and 1780s yet the French monarchy had not yet begun to challenge them. Some new ideas which got back to the French people came from soldiers coming home from the American War of Independence. They had seen how a revolution had happened and that it was the people's right to choose, they had seen the idea that there should be no taxation without representation. They also now knew that a revolution could occur by force as had happened in America. It gave the French people the hope and confidence to start insisting that some of these new ideas were practised. Also, the French monarchy held some responsibility. There is much debate over the role of Louis XVI. ...read more.

In conclusion, it was not just the economic crisis which caused the revolution in 1789, but a variety of factors which are all linked. The economic crisis began with poor harvest and France's aggressive foreign policy. Without these two factors France may not have been facing such economic hardship. Also, these factors lead to new ideas from America and gave people confidence to act on ideas coming from philosophes during the enlightenment. The economic crisis led to hardship among peasants and built up bad feeling, this led them into taking notice of what was said by philosophes in pamphlets and speeches. The Ancien Regime was also an important factor as it meant that the richest people were not contributing to the economy, this was another contributing factor to the economic crisis. Many people were unhappy with the way the monarchy was working. Louis XVI seemed to leave everything until it was too late and people did not trust him. Also Marie Antoinette was seen as influencing Louis and stories about her were being spread through the media. Social, economic and intellectual factors all combined to bring about the French revolution in 1789. No one cause was more important than another, as without all of the factors combining to bring about revolution, it may not have happened. ...read more.