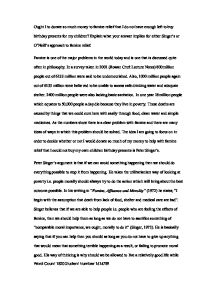 Ought I to donate so much money to famine relief that I do not have enough left to buy birthday presents for my children? Explain what your answer implies for either Singers or ONeills approach to famine relief.

Ought I to donate so much money to famine relief that I do not have enough left to buy birthday presents for my children? Explain what your answer implies for either Singer’s or O’Neill’s approach to famine relief.

Famine is one of the major problems in the world today and is one that is discussed quite often in philosophy. In a survey taken in 2001 (Rowan Cruft Lecture Notes) 800million people out of 6133 million were said to be undernourished. Also, 1000 million people again out of 6133 million were believed to be unable to access safe drinking water and adequate shelter. 2400 million people were also lacking basic sanitation. In one year 18million people which equates to 50,000 people a day die because they live in poverty. These deaths are caused by things that we could cure here with easily through food, clean water and simple medicines. As the numbers show there is a clear problem with famine and there are many ideas of ways in which this problem should be solved. The idea I am going to focus on in order to decide whether or not I would donate so much of my money to help with famine relief that I could not buy my own children birthday presents is Peter Singer’s.

Peter Singer’s argument is that if we can avoid something happening then we should do everything possible to stop it from happening. He takes the utilitarianism way of looking at poverty i.e. people morally should always try to do the action which will bring about the best outcome possible. In his writing in “Famine, Affluence and Morality” (1972) he states; “I begin with the assumption that death from lack of food, shelter and medical care are bad”. Singer believes that if we are able to help people i.e. people who are feeling the effects of famine, then we should help them as long as we do not have to sacrifice something of “comparable moral importance, we ought, morally to do it” (Singer, 1972). He is basically saying that if you can help then you should as long as you do not have to give up anything that would mean that something terrible happening as a result, or failing to promote moral good. His way of thinking is why should we be allowed to live a relatively good life while there are so many people in the world suffering. Nothing we sacrifice, up to the point where our lives are no longer worth living can be of more importance than people who suffer from poverty and are dying terrible deaths that could be so easily avoided.

One way of looking at whether I should give so much of my money to famine relief that I do not have enough money left to buy my children birthday presents, is the idea of the people who are suffering are thousands of miles away from me so have nothing to do with me. Singer uses the idea of that if the person is close to me I am more likely to help them than help someone who is thousands of miles away from me. Singer uses the example of a walking along and seeing a child who is drowning in a shallow pond. Imagine that Singer is wearing designer clothes which would have cost a lot of money and he wades into the water to save the drowning child. He saves the child but his designer clothes are ruined. The argument trying to be conveyed here is that if you are willing to let your designer clothes get ruined to save a life then why not spend the money you would have spent on the designer clothes on saving a life of someone who is suffering from famine. You should give the money to famine relief instead because it is made clear that a life is worth more than a pile of designer clothes. Singer makes the point that people are influenced by the individual situation; is the child I stopped from drowning a close member of my family or is it an impoverished child who I will never meet?  Singer also makes the point that we fight for equality and want to repress discrimination but we will not help people just because they live thousands of miles away from us.  Maybe in the past the idea that it was better to help people in your own town than someone across the world was a reasonable idea but now that it is so easy to transport things across the world it is no longer and acceptable excuse. You can fly to other side of the world within a day now and aid is able to get to the people who need it the most, more easily than ever before. To link it back to the main question here; should I give so much of my money to famine relief that I cannot afford presents for my children’s birthday this argument sways my answer to being yes as I should because a life is more important than possessions. However there are still other factors to discuss before making a final decision.

Furthermore, there are other arguments which Singer makes which is that people try to use the fact that other people do not help with the famine problem so why should they, as an excuse. Singer does not think that this is a reasonable defence for why they do not help prevent people suffering and dying because of famine. If everyone gave something to the famine relief appeal then there would probably be no more famine in the world and the problem would be solved. People argue that if they give money to help with famine and other people do not give anything then that is not a fair way of solving the problem. Why should they help when other people just do not feel compelled to do so as well? This leads onto another important point: the fact that when people do give money to help with famine relief is said to be the act of giving money to a charity. When a person gives money to a relief fund they are seen to be giving money to charity and you normally receive a thank you from that specific charity for your donation. By being thanked for it gives the impression that you did not have to do it and that is one of the reason why people who do not give money to charities to not feel guilty about it. Singer uses a perfect phrase to describe this idea in his writings (page 681 Reason and Responsibility, 2008): “The charitable man may be praised but the man who is not charitable is not condemned”. If we made people feel bad for not giving to charity then maybe the problem of famine would not be so bad. Also, why should people be praised for doing something that is morally right to do? The question I have to ask myself is should I spend the money I would use to buy my children’s birthday presents to help with problem of famine because it is the morally correct thing to do?

Another idea put forward by Singer is the fact that people spend so much money on things that they do not need. I myself go out and buy something new to wear almost once every week but I do not have to do this. I buy new clothes to make myself feel good but at the end of the day my wardrobe is full of perfectly good clothes that I could keep on wearing. If I did this then I would have money to spare that I could give to help with famine relief. The same could be said about plenty of possessions that people own such as televisions. We do not need to go out and spend hundreds of pounds on televisions, we only have them for entertainment but there are other ways in which we could get entertainment that do not cost so much money and the money that we saved could again go to helping with famine relief. To relate this back to my children’s birthday presents, do my children really need the presents I would be giving them i.e. a new iPod. I have to ask myself this question do I think my child really needs the new iPod the answer would be no they do not need it they are not going to die if they do not get this iPod. I also have to say to myself would I be better giving the money to helping famine relief.

In conclusion, I believe that I would want to give a big enough amount of money to famine relief that I would not be able to afford birthday presents for my children. This is for many different reasons. Life is more important than buying presents. If I can save a life just buy not buying presents for my children’s birthday then I should do it. The children are not going to suffer in anyway by not getting presents, they may be a bit disappointed but the thing that is happening from them not getting presents is more important. You would be saving a life! We as a society spend money on possessions that we do not need i.e. new designer clothes, instead of doing this we should use that money to help make life better for people in other societies no matter how far a distance they are from us. If we refuse to help someone just because they are a certain distance away from us then that I being just as discriminating as refusing to help someone because they are black. Also, you cannot just rely on the government to help out with famine relief it is everyone’s responsibility to help.