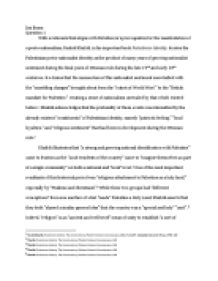 ﻿Jim Beam Question 1 With a rationale that aligns with Hobsbawm?s prerequisites for the manifestation of a proto-nationalism, Rashid Khalidi, in his important book Palestinian Identity, locates the Palestinian proto-nationalist identity as the product of many years of growing nationalist sentiment during the final years of Ottoman rule during the late 19th and early 20th centuries. He claims that the momentum of this nationalist sentiment snowballed with the ?unsettling changes? brought about from the ?outset of World War I? to the ?British mandate for Palestine,? creating a sense of nationalism unrivaled by that which existed before.[1] Khalidi acknowledges that the profundity of these events was intensified by the already existent ?constituents? of Palestinian identity, namely ?patriotic feeling,? ?local loyalties,? and ?religious sentiment? that had been in development during the Ottoman rule.[2] Khalidi illustrates that ?a strong and growing national identification with Palestine? came to fruition as the ?Arab residents of the country? came to ?imagine themselves as part of a single community? on both a national and ?local? level.[3] One of the most important resultants of this historical period was ?religious attachment to Palestine as a holy land,? especially ...read more.

[12] The events that constituted the ?formative period in the genesis of Palestinian nationalist identity? acted as the catalyst while the aforementioned elements of proto-nationalism were the driving force that created the Palestinian national movement. Question 2 The development of a unified Palestinian peasant identity was largely the result of the threatening of their land and labor interests by Zionist settlers. While Palestinian Anti-Zionism had its roots in the peasantry it eventually became a national issue. According to Khalidi, ?it can be argued? that ?the reaction of the peasantry? was both ?central? to the Palestinian-Zionist ?struggle over colonization in Palestine? and to the eventual construction of both a unique ?peasant? identity and a Palestinian identity independent of class; the combined reaction of the peasantry and the elite broke barriers of class and geography to create this mutual Palestinian identity. [13] Although ?most? peasants were ?illiterate,? they were keenly ?aware of events in their immediate region? and ?farther afield?. [14]By no means were the ?Fellahin? (Peasants) ignorant of the ?physical removal of the traditional Arab cultivators? in favor of Zionist ?newcomers,? and oftentimes they ?resisted their dispossession? with violence, which only served to fuel the Palestinian-Zionist conflict and further strengthen the unity of the peasantry. ...read more.