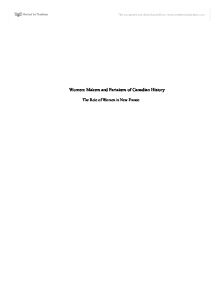 Role of Women in New France

Women: Makers and Partakers of Canadian History The Role of Women in New France As New France developed as a colony in North America between the sixteenth and eighteenth centuries, the significant contributions of key players became engrained in Canadian history. While the majority of recognizable explorers, traders, and generals are male, there are numerous accounts of women assisting or taking charge of various aspects of colonial life. Aboriginal women were able to influence both sides of the fur trade through intermarriage. European women took part in building convents, educating young girls, and gaining political leverage through their spouses. While their usefulness was never-ending, women, both European and Aboriginal, were subjected to a very different lifestyle as New France was being molded into a nation. This new lifestyle opened up many opportunities and, despite the ever-present toils and patriarchal views that they had to endure, both European and Aboriginal women acted as essential entities in the development of New France. The experiences of the Aboriginal women differed greatly from those of the European women. What they do have in common, though, is that they were able to influence the roles of men and that, regardless of their roles in the development of New France, they were limited by a patriarchal society. However, through an increasing access to literature from the period of colonization in New France, women, Native and European alike, created an overlap of the "home and the public sphere" through ...read more.

Upon seeing the relative equality between the sexes among the Natives, the missionaries carried out intensive campaigns to restore their disruption of the "natural authority".15 However, despite being submerged into a European tradition, many Aboriginal women were able to gain financially from the European system. While the world they knew transformed into one that relied on capital, the Aboriginal women benefitted from their ties to the French. Numerous french officers placed their Native wives in their wills, ensuring that they would be provided for.16 The negative aspects of intermarriage take a toll on the culture of Aboriginal women. Nevertheless, to assume that they were unknowing victims to this is incorrect. The Native women understood their potential to aid the fur trade and, although they sacrificed much, they were able to gain a new lifestyle that appropriated them with the developments that were occurring around them. As the Aboriginal women became a critical part of the fur trade, European women lent their support to the social development of New France. The first significant group of women that landed in the North American colony came with the intent to establish institutions that would promote the development of a society in New France. The devot�s started to come in 1640 to start up convents.17 Here the sisters and nuns would take in young girls, Aboriginal and European, and educate them. ...read more.

The European women remained in a patriarchal society where they would remain inferior, but their position in society, on average, was stronger than anywhere else at that time.32 Rather than just have a history of male explorers and conquerors, the history of New France is rich with significant women applying their talents to the evolution of this nation. While they did endure numerous toils within their daily lives, the women involved in the development of the colony of New France entered a new lifestyle that relied on them in order to evolve. French ideals may have called for "one law, one religion, one king, and one people," yet the role of many people, several cultures, and varying authoritative figures was essential to the production of a solid nation in New France.33 The convents that supplied a religious people with a solid institution for education and theology, the noblewomen who owned businesses and worked with their husbands to contribute to the nation's economy, the filles du roi who populated the towns and cultivated much of the land, and the aboriginals who worked to maintain the vital fur trade are all apart of Canada's history. The success of New France can be attributed to strong battles, solid legislation, and courageous explorers. However, it is the individuals of this colony that built the nation. The men along with, and beside, the women constructed New France. ...read more.