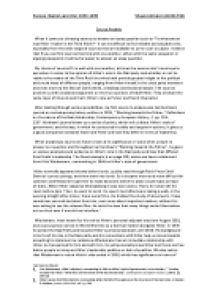 Source Analysis - Was Hitler really Master in the Third Reich?

ï»¿Europe, Nazism and War: 1930-1945 Shaun Johnston (11061744) Source Analysis When it comes to choosing sources to answer an essay question such as “To what extent was Hitler ‘master in the Third Reich?’” it can be difficult to find reliable and valuable ones, especially from the wide range of sources that are available to us for such a subject. I believe that if you can find sources that link with one another, either with the same viewpoint or arguing viewpoints it will be far easier to answer an essay question. My choice of sources fit in well with one another, at times the sources don’t meet eye to eye when it comes to the opinion of Hitler’s role in the n**i party and whether or not he really is the master of the Third Reich but they both provide greater insight to the political and social ideas of different people, ranging from Hitler himself, to his close party members and even more to the likes of Carl Schmitt, a leading constitutional lawyer. The sources provide us with a balanced argument on the true opinions of Adolf Hitler. They all share the same topic of interest and that’s Hitler’s role as Fuhrer and Reich Chancellor. After looking through various possibilities, my first source to analyse was Ian Kershaw’s journal on contemporary history written in 1993, “’Working towards the Führer.” Reflections on the nature of the n**i dictatorship, Contemporary European History, 2, pp. ...read more.

This does not make the source 100% reliable but it does allow us to have an insight on Hitler?s role in the n**i party from the viewpoint of one of his party members. We cannot forget to mention that Wiedemann was a strong supporter of the n**i party, a Partisan and upheld his political views long after he left his role as Hitler?s assistant, which could make his statement on Hitler very biased and not tell us the whole truth. This particular part of Kershaw?s journal has many others like it; Wiedemann is not the first n**i party member to make a statement on Hitler?s role in government. When using this source as a piece of evidence in formulating an opinion on Hitler?s role in the Reich it is very useful to the historian or student but ?opinions? on Hitler can be found almost everywhere and it doesn?t really offer much that other sources can?t. My second source I decided to analysis was J.Noakes and G.Pridham?s edited of ?Nazism 1919-1945, vol. 2, State, Economy and Society: 1933-1939? which is a documentary reader that focuses on the domestic aspects of the regime between 1933 and 1939. The book gives more than enough examples of peoples different opinions how Hitler ruled the n**i regime and to what extent he had with the dealings of the parties policy. In particular, on page 205, we have a statement from Otto Dietrich, born August 1897, who also fought in the First World War, who was later awarded an Iron Cross. ...read more.

Both examples from Hitler’s n**i members have great importance, as they have both had significance for historians when writing their books, journals or articles. Kershaw, Noakes and Pridham have all used these ‘statements’ made by Wiedemann and Dietrich, using them to support their argument they are trying to raise in their work, just as we could as historians and students when writing our essays. We can acknowledge that the two sources are primary sources, and we can also see they were intended for publication, and nothing was hidden or meant to be private. It was clearly aimed for a mass audience and the world to see, which can be taken two ways. Firstly that the statements were created purposely in order for the world to see Hitler as the West saw fit, through propaganda, as both Dietrich and Wiedemann were later arrested after the war or secondly that it simply is the true opinion of both party members. We have to be careful when using the sources as evidence as it could not be the opinion of the members, more so the opinion of Western governments propaganda. Two Sources Chosen: 1. Fritz Wiedemann, Hitler’s adjutant, commenting in 1964 on Hitler’s style of government, in Ian Kershaw, ‘”Working towards the Führer.” Reflections on the nature of the n**i dictatorship’, Contemporary European History 2, (1993), pp. 103-118 2. Hitler’s press chief Otto Dietrich, commenting (after the fall of the regime) on the structure of the n**i state, in Noakes & Pridham, Nazism 1919-1945, vol 2, p. 205 ...read more.