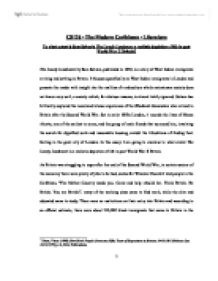 To what extent is Sam Selvon's The Lonely Londoners a realistic depiction of life in post World War II Britain?

CS126 - The Modern Caribbean - Literature To what extent is Sam Selvon's The Lonely Londoners a realistic depiction of life in post World War II Britain? The Lonely Londoners by Sam Selvon, published in 1956, is a story of West Indian immigrants arriving and settling in Britain. It focuses specifically on West Indian immigrants in London and presents the reader with insight into the realities of a subculture which mainstream society does not know very well, a society which, for obvious reasons, is almost totally ignored. Selvon has brilliantly captured the mood and intense experience of the Windrush Generation who arrived in Britain after the Second World War. Set in early 1950s London, it records the lives of Moses Aloetta, one of the earliest to come, and the group of male friends that surround him, involving the search for dignified work and reasonable housing, amidst the tribulations of finding their footing in the great city of London. In this essay I am going to examine to what extent The Lonely Londoners is a realistic depiction of life in post World War II Britain. As Britain was struggling to cope after the end of the Second World War, in certain sectors of the economy there were plenty of jobs to be had, and as Sir Winston Churchill told people in the Caribbean, "The Mother Country needs you. ...read more.

The fog which covers and blurs the capital turns it into a nightmare world, where Waterloo station inspires feelings of nostalgia for home, especially when new arrivals disembark. Of course the difference in climate is particularly hard and the desolation of winter makes the capital even more unbearable: It have some snow on the ground and the old fog at home as usual. It look like h**l.6 The "beast winter"7 brings mornings when the sun shines without heat and "the colour of the sky so desolate it make him more frighten".8 Trying to get settled in London depends on a certain number of basic factors: a job, lodgings and someone to guide you round and help you out. Moses is the veteran immigrant who takes in Galahad, and shows him the ropes. The Labour Exchange, "where hate and disgust and avarice and malice and sympathy and sorrow and pity all mix up"9 is the first place where colour prejudice is shown, as the record cards are marked to indicate whether you are black or not. As for accommodation, the severe discipline of the temporary hostel is the only alternative to sharing cramped rooms in Brixton, exploiting landlords and where "the heat make water on the glass".10 Earning wages of �5 a week and obliged to pay between �2 and �3 in rent, life is hard, and things ...read more.