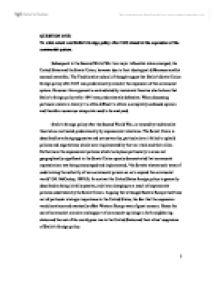 To what extent was Stalin's foreign policy after 1945 aimed at the expansion of the communist system.

QUESTION ONE: To what extent was Stalin's foreign policy after 1945 aimed at the expansion of the communist system. Subsequent to the Second World War two major influential states emerged, the United States and the Soviet Union, however due to their ideological differences conflict seemed inventible. The Traditionalist school of thought argues that Stalin's Soviet Union foreign policy after 1945 was predominantly aimed at the expansion of the communist system. However this argument is contradicted by revisionist theories who believe that Stalin's foreign policy after 1945 was predominantly defensive. When discussing particular events in history it is often difficult to obtain a completely unbiased opinion and therefore numerous viewpoints need to be analyzed. Stalin's foreign policy after the Second World War, is viewed by traditionalist theorists as motivated predominantly by expansionist intentions. The Soviet Union is described by as being aggressive and untrustworthy, particularly as it failed to uphold policies and negotiations which were implemented by the two rivals and their allies. Furthermore the expansionist policies which took place particularly in areas not geographically significant to the Soviet Union openly demonstrated that communist expansionism was being encouraged and implemented, "the Soviets always seek ways of undermining the authority of non-communist powers so as to expand the communist world" (M. ...read more.

The implementation of the Truman doctrine is substantial evidence that the western powers and hence traditionalist writers saw communism as a realistic threat, and further viewed Stalin as a supporting player in the events occurring. In contrast to the traditionalist view, revisionist theorists argue that Stalin's Soviet foreign policy after 1945 was predominantly motivated by security interests. They argue that Stalin was not interested in global communist expansion but rather wanted to create a protective barrier around the Soviet Union. Due to this revisionist writers have tended to down play the Soviet Unions movements in the Mediterranean regions and particularly Greece arguing that Stalin lacked enthusiasm for other communist leaders not directly related to the Soviet Unions sphere of influence. The communist ideology lies on the belief that through the uprising of the proletariat / working class it is inevitable that the world would eventually become communist. Therefore revisionists argue there was no need for Stalin to implement expansionist policies in either the Mediterranean or elsewhere not directly related to the Soviet Unions direct security interests. In addition it can further be argued that after the Second World War the Soviet Union was in no position to cause tensions with either the United States or Britain. ...read more.

Economic considerations, too, influenced the United States foreign policy as the constant fear of a recession after the Second World War was continually present. Both revisionist writers and economists believed that if exports were increased and raw materials common in many European states could be more readily available, such a down fall may be avoided. Therefore expansionism in Europe seemed important in deterring a recession and allowed the United States greater access to international markets. Furthermore "the Soviet leadership, from this revisionist viewpoint, could not tolerate such a threat to its security interests in Eastern Europe, particularly as American trade and investment were frequently accompanied by militant anti communism". (M. McCauley, 1983:13). In conclusion there is much disagreement and contradiction in relation to Stalin's Soviet foreign policy after 1945 particularly between traditionalist and revisionist theorists. Traditionalists argued that Stalin's policies were predominantly motivated by communist expansionism and although particular documents tended to prove this, there is also great evidence that much of his foreign policy was actually grounded on security interests and fears. When discussing particular events in history it is difficult to obtain a completely unbiased view and although some arguments may offer more substantial evidence it is difficult to disregard all other factors which may have also been present. 1 ...read more.