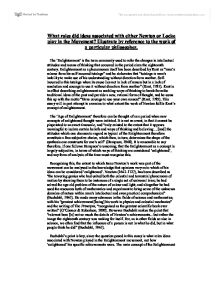 What roles did ideas associated with either Newton or Locke play in the Movement? Illustrate by reference to the work of a particular philosopher.

What roles did ideas associated with either Newton or Locke play in the Movement? Illustrate by reference to the work of a particular philosopher. The 'Enlightenment' is the term commonly used to refer the changes in intellectual attitudes and means of thinking that occurred in the period circa the eighteenth century. Enlightenment as a phenomenon itself has been described by Kant as "man's release from his self-incurred tutelage" and he elaborates that "tutelage is man's inability to make use of his understanding without direction from another. Self-incurred is this tutelage when its cause lies not in lack of reason but in a lack of resolution and courage to use it without direction from another" (Kant, 1785). Kant is in effect describing enlightenment as enabling ways of thinking to break from the traditional ideas of the past and provide a new, rational form of thought, and he sums this up with the motto "Have courage to use your own reason!" (Kant, 1785). This essay will in part attempt to examine to what extent the work of Newton fulfils Kant's concept of enlightenment. The 'Age of Enlightenment' therefore can be thought of as a period when new concepts of enlightened thought were initiated. It is not an event, in that it cannot be pinpointed to an exact timescale, and "only existed to the extent that it appears meaningful to isolate certain beliefs and ways of thinking and believing... [and] the attitudes which one chooses to regard as typical of the Enlightenment therefore constitute a free subjective choice, which then, in turn, determines the shape of the synthesis one constructs for one's self" (Hampson, 1968). It is reasonable to say therefore, if one follows Hampson's reasoning, that the Enlightenment as a concept is largely subjective, in terms of which ways of thinking are considered 'enlightened', and any form of analysis of the time must recognise this. ...read more.

Significant events that had occurred relatively recently at this including the Plague outbreak in England and the Thirty Years War in Germany were seen as "tangible reminders of the wrath of God and the vulnerability of fallen man, for whatever happened was evidence of this divine scheme" (Hampson, 1968). Advances in astronomy were crucial in changing this view since "the pushing back of [limits of space] to unimaginable dimensions... [led to] the idea of man as a uniquely significant being appearing increasingly presumptuous" (Hampson, 1968). Hampson also states that at times "the names of Galileo and Newton have been brandished like battle standards in the Holy War of science against superstition". This is an over-simplification however, since "there is considerable disagreement on the nature of his influence" (Lively, 1966), and the following point which I consider to be crucial, and worth quoting at length: "Newton devoted many years to biblical studies... [and] believed that Moses knew all about the heliocentric theory and the law of gravity. It was wholly typical of the age that Newton should have devoted years of study to an attempt to establish a scientific basis for the chronology of antiquity by applying his accurate knowledge of the procession of the equinox to defective documentary material" (Hampson, 1968, p34) In other words Newton still passionately believed in the traditional biblical view of the world despite the fact that it contradicted his own rational scientific findings, leading one to question how 'enlightened' he was. However, Buchdahl's point that what is important is not what he did, but what people think he did, leads me to suggest that Newton's ideas still played a vital role in the Enlightenment. Indeed, Lively notes that it is "generally agreed" that Newton's influence "on the progress of both the natural and the social sciences was far reaching" (Lively, 1966). Again reflecting the subjective nature of the Enlightenment, Lively (1966) ...read more.

The other interpretation of Newton's achievements was "the admiration showered on the vast synthesising scientific theory as exemplified in Newton's laws of gravitation and motion" (Lively, 1966). This seems to be an appreciation of Newton's theories, i.e. the results of his investigations rather than the methodologies used to obtain them. Kant and Newton seem to have similar opinions on how far it is possible to advance scientific knowledge. Outram (1995) states that Kant was "impatient with those of his contempories who saw their own time as one of unbounded progress towards the fulfilment of human potential"; likewise Newton, in a letter to Oldenburg, states "I do not see by what stipulation anything certain can be determined in any science; since one or another set of hypotheses may always be devised which will appear to supply new difficulties" (quoted in Lively, 1966). To conclude, Newton's role in the Enlightenment is as much to do with the thought that he "exemplif[ies] perfectly the scientific method as because of the importance of his particular discoveries" (Lively, 1966). The importance he attached to the forces of reason and the experimental method were a crucial part of new process of enlightenment, and this is in agreement with the work of Kant, who agrees that experience of the empirical world and methodology such as Newton's is the way to find reason. However, Kant's statement that "If it is now asked whether we live at present in an Enlightened age, then the answer should be: No, but we do live in age of Enlightenment" (quoted in Outram, 1995), is very valid since spiritual and theological beliefs still held sway even for Newton, who was at the forefront of the new scientific methods. Newton's ideas played a pivotal role in the Enlightenment, but cannot be said to fully enlightened, as he still attempted to base the new discoveries on what Hampson describes as "defective documentary material." Perhaps the best way to sum up is that Newton's work was pivotal in the commencement of the process of enlightenment, a process which continues indefinately, since absolute knowledge is impossible to attain. ...read more.