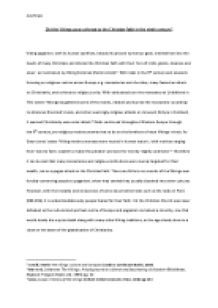 What threat did the Vikings pose to Carolingian Christianity?

﻿Jess Shaw Did the Vikings pose a threat to the Christian faith in the ninth century? Viking paganism, with its human sacrifices, b****y rituals and numerous gods, instilled fear into the hearts of many Christians and diluted the Christian faith with their ?lore of trolls, giants, dwarves and elves? as mentioned by Viking historian Martin Arnold[1]. With raids in the 9th century and onwards focusing on religious centres across Europe e.g. monasteries and churches, many feared an attack on Christianity, and a threat to religious unity. With early attacks on the monastery at Lindisfarne in 793, where ?Vikings slaughtered some of the monks, robbed and burned the monastery? according to Johannes Bronsted?s book, and other seemingly religious attacks on Iona and Kintyre in Scotland, it seemed Christianity was under attack.[2] Raids continued throughout Western Europe through the 9th century, yet religious motives seemed not to be on the forefront of most Vikings? minds. As Gwyn Jones? states ?Viking motives overseas were routed in human nature?, with motives ranging from ?land to farm, wealth to make life splendid? and even for merely ?dignity and fame?[3]. Therefore it can be said that many monasteries and religious institutions were merely targeted for their wealth, not as a pagan attack on the Christian faith. ...read more.

This led to religious panic and combined with the Frankish civil wars led to an overall defeat in morale and religious unity. The Vikings played a role in the fragmenting of the Carolingian Empire, threatening Christianity to an extent that broke people?s faith and had them doubting their lives, believing the end was nigh. However, if this was an intentional tactic by the Vikings is hard to decipher. It is clear that Christianity in the Carolingian Empire was definitely damaged by the Vikings, as can be seen in the apocalyptic thoughts of the time so a threat was definitely posed, but not a great enough one to defeat Christianity for good or convert people to their pagan ways. The Vikings most likely unintentionally, contributed to the end of one of the world?s great superpowers, threatening Christianity in the short term, and terrorising people to such an extent, some prayed for the apocalypse, leading to an overall threat to Christian unity. Another important point to take into account is the Vikings conversion to Christianity themselves, with baptism of Danes starting in 823. This leads to the question of how much of a threat could the Vikings have been causing to Christianity if slowly but surely they were being Christianised themselves? ...read more.