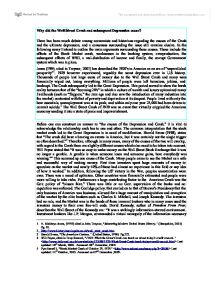 Why did the Wall Street Crash and subsequent Depression occur?

Why did the Wall Street Crash and subsequent Depression occur? There has been much debate among economists and historians regarding the causes of the Crash and the ultimate depression, and a consensus surrounding the issue still remains elusive. In the following essay I intend to outline the main arguments surrounding these causes. These include the effects of the Stock Market crash, weaknesses in the banking system, overproduction, the subsequent effects of WWI, a mal-distribution of income and finally, the corrupt Government system which was in place. Jones (1995, cited in Traynor, 2001) has described the 1920's in America as an era of "unparalleled prosperity"1. 1929 however experienced, arguably the worst depression ever in U.S history. Thousands of people lost large sums of money due to the Wall Street Crash and many were financially wiped out, losing everything. Millions of people were left homeless, jobless, and bankrupt. The Crash subsequently led to the Great Depression. This period served to show the harsh reality between that of the "booming 20's" in which a culture of wealth and luxury epitomized many livelihoods (such as "flappers," the Jazz age and also saw the introduction of many industries into the market) contrasted with that of poverty and deprivation at its deepest. People lived with only the bear essentials, unemployment was at its peak, and within only one year 23,000 had been driven ...read more.

This stress upon high productivity continued up until Nov 1918. As a result this period witnessed the emergence of new technology and equipment which evidently led to an increase in output. The demand for food however was not increasing at the same rate; prices fell, and farmers incomes dropped steadily. Historian J. Freeman (1990) notes that "Many farmers simply gave up... Thirteen million acres of cultivated land were abandoned." In 1920, 27% of the overall labour force were employed in agriculture and by 1930, this fad fallen to 21.2%.7 This ultimately led to the Crash and Depression as in order to sustain a livelihood many farmers were forced to sack their workers. This in turn led to the workers falling below the poverty line and the demand for these new consumer goods- radios and washing machines also fell. The textile and rail road industries were also badly affected by the diminishing demand and excess capacity. One reason why consumption struggled to match production was the great unequal distribution of wealth throughout the 1920s. Paul Alexander Gusmorino 3rd attributes the mal-distribution of wealth as the main cause of the Crash and Great Depression.8 Traynor (2001) records that "In 1929, one-third of the nation's income was in the hands of only 5% of the population and just over 70% of the population received an income below $2500 a year."9 Wealth was inequitably dispersed. ...read more.

Traynor, (2001) notes how in May 1931 the collapse of the Austrian Kredit-Anstalt bank signalled the general collapse of the European economy. American assets were frozen.14 Finally, in conclusion, Benjamin M.Friedman (2007) states that "nearly 8 decades later, debate continues over the relative importance of the forces that combined to make what would otherwise have been an ordinary business downturn so deep and long lasting."15 The Wall Street Crash of 1929 was an indication of serious, underlying problems in the US economic structure, but it was not the exclusive cause of the Great Depression. The Crash merely highlighted the cracks already apparent in Americas superficial prosperity. The 1929 Stock Market Crash and subsequent Depression were the result of various economic imbalances and structural failings. Excessive speculation and credit, coupled with a weak banking and Gov. system, a complete mal-distribution of wealth, a breakdown in international trade and finally huge problems within the agricultural sector would appear to have caused the Stock Market Crash and subsequent Depression. It is clearly evident, that an answer to this question is still an ongoing debate, however one cannot attribute one sole cause to either the Market Crash or Depression. It was a conglomeration of all these problems which led to such a disastrous result. ...read more.