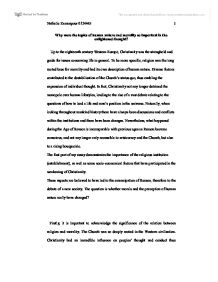 Why were the topics of human nature and morality so important in the enlightened thought?

Why were the topics of human nature and morality so important in the enlightened thought? Up to the eighteenth century Western Europe, Christianity was the stronghold and guide for issues concerning life in general. To be more specific, religion was the long rooted base for morality and had its own description of human nature. Diverse factors contributed to the destabilisation of the Church's status quo, thus enabling the expression of individual thought. In fact, Christianity not any longer detained the monopole over human lifestyles, leading to the rise of a vast debate relating to the questions of how to lead a life and man's position in the universe. Naturally, when looking throughout mankind history there have always been discussions and conflicts within the institutions and there have been changes. Nevertheless, what happened during the Age of Reason is incomparable with previous ages as Reason became conscious, and not any longer only accessible to aristocracy and the Church, but also to a rising bourgeoisie. The first part of my essay demonstrates the importance of the religious institution (establishment), as well as some socio-economical factors that have participated in the weakening of Christianity. These aspects are believed to have led to the emancipation of Reason, therefore to the debate of a new society. The question is whether morals and the perception of human nature really have changed? ...read more.

In other words, d'Holbach argues that morality bases itself on religion. Moreover, man was the oppressed puppet of the priests, "at the mercy of his priests17". People were enslaved by being kept in ignorance and fearful of a mysterious phantom (God). According to d'Holbach, the use of knowledge, Reason and liberty would transform people into happy beings. There is not any need of theology for true morality, only of Reason18 which will give man experience and the motivation to "please himself and his fellow creatures19". On the whole, it can be said that these internal and external factors lead to a shift of position of Christianity, which was deeply embedded in the European culture. The question is now: how was a new society to be led with a diminished religious power, and based on what way of thought? Kant suggested a categorical imperative. Although, it could be very much associated with the 'golden rule', Kant based himself on the use of reason. According to him, there is a major conflict within morality and happiness. Duty (to the state and to God) is part of non-autonomous ethics, while bodily passions are not, and therefore should be controlled by the reason. Nevertheless, no supernatural authority is to teach us morality. For this, reason needs constancy and constancy requires the same rules for everyone. His universal rule bases itself on treating others as ends, not as means and leads us to act on principle despite the consequences. ...read more.

pp. 164. This book is however, as the title suggests, written in French. Hazard, P. (1973). The Enlightenment Mind 1680-1715. Paris: Penguin University Books. Some good parts on deism and natural religion pp. 293 and 'new morality' viewed by Christians pp. 330 (although not included in the essay because of a lack of space). Kramnick, I. (1995). The Portable Enlightenment Reader. London: A Penguin book. An excellent reader that offers a variety of ideas and thinkers. It has been very useful to my essay. It is howerver a shame that there is not any index at the end of the book. Outram, D. (1999). The Enlightenment. Cambridge: Cambridge University Press. The book contains a good overview and general ideas of the Enlightenment, especially on women's position (chapter 6, pp.80) Singer, P. (2001). A Companion to Ethics. Melbourne: Blackwell Reference. Some interesting information on Christian morality but I did not find what I was looking for (religious input on jurisdiction). Generally good as background knowledge, although not relevant as such concerning the Enlightenment. Theories of Human Nature Reader (2001). Kingston University This study pack contains a good first hand-sources compilation, especially interesting for the women condition seen in Christianity. The Oxford Dictionary of World Religions (1997). Oxford The part on Christianity was helpful, especially the one on St Augustine. Thompson, M. (1999). Ethical Theory. London: Hodder & Stoughton. This second-hand source was helpful to underline the ethical mainstreams that have formed during the eighteenth century on pages 84 (Kant), 74 (Bentham) and 66 to 73 (on Hobbes, Rousseau and Locke). ...read more.