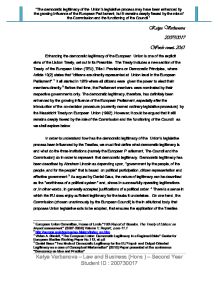 The democratic legitimacy of the Unions legislative process may have been enhanced by the growing influence of the European Parliament, but it remains deeply flawed by the role of the Commission and the functioning of the Council.

Katya Varbanova 200730017 Words count: 2061 Enhancing the democratic legitimacy of the European Union is one of the explicit aims of the Lisbon Treaty, set out in its Preamble. The Treaty includes a new section of the Treaty of the European Union (TEU), Title II Provisions on Democratic Principles, where Article 10(2) states that ''citizens are directly represented at Union level in the European Parliament''.1 It all started in 1979 where all citizens were given the power to elect their members directly.2 Before that time, the Parliament members were nominated by their respective governments only. The democratic legitimacy, therefore, has definitely been enhanced by the growing influence of the European Parliament, especially after the introduction of the co-decision procedure (currently named ordinary legislative procedure) by the Maastricht Treaty on European Union (1992). However, it could be argued that it still remains deeply flawed by the role of the Commission and the functioning of the Council as we shall explore below. In order to understand how has the democratic legitimacy of the Union's legislative process been influenced by the Treaties, we must first define what democratic legitimacy is and what do the three institutions (namely the European Parliament, The Council and the Commission) ...read more.

The commission has no obligation to adopt them. The proposal is then sent back to the Council along with any parliamentary amendments it had not accepted and the reasons for this refusal. The Council can accept the amended proposal by a qualified majority or it can amend it by adopting its own amendments or those proposed by the Parliament. This has to be done unanimously in the Council. The main difference of the special legislative procedure is that it contains no procedure for compulsory conciliation (as opposed to the ordinary legislative procedure) and the Council could not be prevented from adopting a text that ignored the European Parliament's wishes. However, the European Parliament still has to be consulted. The Isoglucose case19 explained the reason for that. The Court argued that it is essential for the Parliament to play an actual part in the legislative process because it reflects the Community's democratic principle that people should take part in the exercise of power through the intermediary of a representative assembly. It could be argued that the Union's democratic legitimacy has been enhanced by the Parliament. In 1979, it was perhaps reasonable to suggest that the Parliament was little more than a ''a talking shop'', since under the Treaty of Rome, its powers were primarily ''advisory'' and ''supervisory''. ...read more.