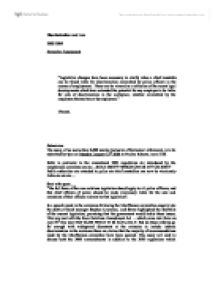 Discrimination and Law 2003-2004 Formative Assessment "Legislative changes have been necessary to clarify when a chief constable can be found liable for discrimination committed by police officers in the course of employment. These can be viewed as a reflection of the recent legal developments which have extended the potential for any employer to be liable for acts of discrimination in the workplace, whether committed by the employers themselves or by employees." Discuss. Submission The essay, of no more than 2,500 words (inclusive of footnotes / references), is to be submitted by 4pm on Monday, January 12th, 2004 to Pauline Roberts, room 1.08. Refer in particular to the amendment 2003 regulations etc introduced by the macpherson committee etc etc...RRAA 2000??? WHICH ONE IS IT?? OR 2003?? Public authorities etc extended to police etc chief constables can now be vicariously liable etc etc etc.... Start with quote..... "The full force of the race relations legislation should apply to all police officers, and that chief officers of police should be made vicariously liable for the acts and omissions of their officers relevant to that legislation". In a speech made in the commons following the MacPherson committee enquiry into the death of black teenager Stephen Lawrence, Jack Straw highlighted the shortfalls of the current legislation, promising that the government would tackle these issues. ...read more.

Nor could the commissioner be liable for the actions of his officers under the normal employment rule, because police are historically not employees but independent office-holders. These shortfalls were unacceptable considering these are areas in which the individual is most vulnerable to racial discrimination, as was apparent in the reaction of the police and other authorities in response to the murder of a young black man, Stephen Lawrence. The MacPherson enquiry was established to investigate the response to the murder and subsequently their findings of 'institutional racism' lead to further attacks on the inadequacy of the current legislation. Thus the Amended Race Relations Act 2000 has now been introduced to combat these deficiencies. One will now discuss the relevant provisions in relation to this essay. Firstly the Amended Act makes it unlawful for a public authority to discriminate or victimize a person on racial grounds in carrying out any of its functions. Crucially, this is not confined to employment, education, and services, but applies to all functions of specified public authorities. Law enforcement, inclusive of the police, and local authorities will for the first time be subject to the legislative provisions. A further significant amendment relates to chief police officers and the fact that for the first time they can be made vicariously liable for acts of discrimination. ...read more.

But the fact that the amendment was only restricted to direct discrimination was a "serious omission". Extending the law to deal with indirect discrimination was the great innovation when the present Race Relations Act was passed in 1976, reflecting the growing recognition that it was the hidden, often unconscious, kinds of discrimination that were the most insidious and widespread. The focus of the Lawrence report was on the prevalence of institutional discrimination, which is commonly indirect. The disastrous failure to bring Stephen Lawrence's killers to justice stemmed from attitudes and practices in investigating crime which could have played a similar part in the many other investigations into the deaths of black people, such as Michael Menson and Ricky Reel. Direct discrimination can hardly ever be established. Further proposals for reform?? CONCLUSION In conclusion as Jack Straw acknowledged during the passage of the Bill to make the amendments, there is still a long way to go to make Britain a 'beacon of equality' and despite the initial praise, the legislation has suffered extensive criticism at its failure to acknowledge indirect discrimination in its reforms, with this form of discrimination left omitted further reforms are necessary.....QUOTE FROM CRE... SCARMAN??? REFORMS ETC ETC 1 Farah v Commissioner for the Police of the Metropolis [1998] QB 65 (CA) 2 ...read more.