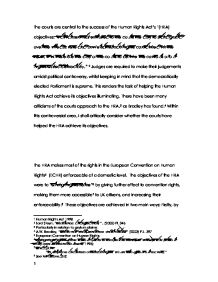 Have the courts helped the Human Rights Act achieve its objectives?

The courts are central to the success of the Human Rights Act's 1(HRA) objectives: "Parliament has entrusted to the courts the duty to stand guard over the irreducible and universal human rights contained in the ECHR. It is therefore the duty of the courts to define the contours of our rights-based democracy." 2 Judges are required to make their judgements amidst political controversy, whilst keeping in mind that the democratically elected Parliament is supreme. This renders the task of helping the Human Rights Act achieve its objectives illuminating. There have been many criticisms of the courts approach to the HRA,3 as Bradley has found.4 Within this controversial area, I shall critically consider whether the courts have helped the HRA achieve its objectives. The HRA makes most of the rights in the European Convention on Human Rights5 (ECHR) enforceable at a domestic level. The objectives of the HRA were to "bring rights home"6 by giving further effect to convention rights, making them more accessible7 to UK citizens, and increasing their enforceability.8 These objectives are achieved in two main ways: Firstly, by creating a new rule of statutory interpretation (section 3)9 and secondly, ensuring that public bodies act compatibly with the convention rights (section 6).10 These two sections are fundamental to the success of the HRA, therefore, they will be the basis for this paper. Through examining the relevant case law; it can be seen whether the courts have helped the HRA achieve its objectives, or if they have placed obstacles in its path. Section 311 creates a new rule of statutory interpretation; statute law has to be interpreted "so far as it is possible"12 compatibly with convention rights. Lord Woolf explains:"It is as though legislation which predates the HRA and conflicts with the Convention has to be treated as being subsequently amended to incorporate the language of section 3."13 This is a considerable power on the courts in relation to developing the law as they can edit legislation. ...read more.

The central issue was whether a private company running a care home was a public authority under section 6.61 The case went up to the HoL where many influential bodies appeared62, all arguing that the private company was a public authority. Unbelievably, the HoL held on a 3 to 2 majority that the private company was not exercising a function of a public nature. The 3 judges drew a distinction between arranging care and providing care, reaching the same conclusion as Lord Wolf in Leonard Cheshire. 63 This does not make sense, how can it not be a function of a public nature not to care for vulnerable persons? This is clearly against the HRA objectives. It is questionable why the courts are continuing with the wrong approach. It is likely that the courts are resistant to the idea that the private sector should be under a duty to respect Human Rights. Lord Scott in YL argued that the private body was carrying out its private business. Lord Mance concurred, arguing the private body had commercial motivation. The dissenting judges64 were adamant that the private company was providing a public function and that Leonard Cheshire65 was wrongly decided. Lord Bingham commented that it is clearly against the intentions of Parliament: "If, as may be confidently asserted, Parliament intended the Act to offer substantial protection of the important values expressed in the articles of the Convention given domestic effect by the 1998 Act, it can scarcely have supposed that residents of privately run care homes ... would be unprotected"66 Klug and Starmer conclude that the restrictive approach by the courts is having a detrimental effect on the objectives of the HRA: "There is every prospect that the Act can fulfil the government's broad obligations under the ECHR. However an unduly restrictive approach to s.6 risks defeating, at least in part, this goal."67 Due to the resistance from the courts, Parliament implemented a provision68 that protects the vulnerable in private care homes, but there is no mention of other scenarios. ...read more.