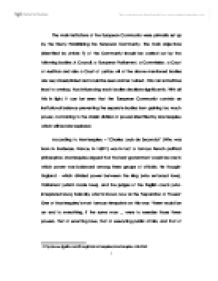 The main institutions of the European Community were primarily set up by the Treaty Establishing the European Community. The main objectives (Identified by Article 7) of the Community should be carried out by the following bodies: A Council, a European Parliament, a Commission, a Court of Auditors and also a Court of Justice. All of the above mentioned bodies are very closely linked and could be seen as inter-twined , this can sometimes lead to overlap, thus influencing each bodies decisions significantly. With all this in light, it can be seen that the European Community controls an institutional balance preventing the separate bodies from gaining too much power, contrasting to the classic division of powers identified by Montesquieu which will be later explored. According to Montesquieu - 'Charles Louis de Secondat' (Who was born in Bordeaux, France, in 16891) was in-fact a famous French political philosopher. Montesquieu argued that the best government would be one in which power was balanced among three groups of officials. He thought England - which divided power between the king (who enforced laws), Parliament (which made laws), and the judges of the English courts (who interpreted laws.) Basically, what is known now as the 'Separation of Powers' One of Montesquieu's most famous viewpoints on this was: "there would be an end to everything, if the same man ... were to exercise those three powers, that of enacting laws, that of executing public affairs, and that of trying crimes or individual causes."2 Montesquieu held the ...read more.

The role of the Commission is set out in Article 211 of the EC Treaty and has four primary duties. The first one is that it is put in place to formulate recommendations or deliver opinions on matters dealt with in the Treaty, if the Treaty either expressly requires it or if the Commission thinks it necessary. Furthermore the Commission is put in place to take part in decision making and legislative process of the Community with the Council of Ministers and the European Parliament, it also ensures that the provisions of the Treaty and measures taken by institutions are applied. Finally the European Commission was put in power to exercise the powers conferred on it by the Council of the Ministers for the implementation of rules laid down by the latter. Accordingly, the Commissions executive powers are also restricted by other institutions of the Community. The Parliament has the biggest influence on the Commission as it is the only body that can approve its composition and in turn, it's leadership as seen in Article 214 EC Treaty. Moreover, when implementing policy, the Commission has no real sovereignty to do so, It can only do so if a certain procedure is followed (laid down in Article 262 EC Treaty) and includes consultation with a number of committees. Only if such consultation procedure is satisfied and certain bodies agree on the necessity of the policy a draft is created and put upon the agenda for voting. ...read more.

The COA was set up in 1975 and is again located in Luxembourg. Finally the ECJ has no jurisdiction over the Commission. However, despite these restrictions the Judiciary remains mainly uninfluenced and therefore is an institution that complies with Montesquieu's theory of division of powers. To conclude, the European Community is constructed in such a manner that is does comply with Montesquieu's definition of separation of powers to an extent. As seen, Law-making procedures within the Community restrict the ability of certain bodies to make independent decisions, though does not jeopardise the citizens of Europe's liberty and right to freedom as Montesquieu once stated: "There is no liberty, if the judiciary power be not separated from the legislative and executive." 10 In addition, individual bodies have influence on each other particularly in the areas of decision making. The various pillars are constructed in such a way in order to put each other under the spotlight, analysing their decision making, basically cancelling each other out to make sure one pillar does not become too powerful. The Judiciary still remains fairly independent, which is a positive element of the Community. Perhaps, if the Reform Treaty was approved by all member states certain bodies, whether that be parliament, commission, ECJ etc could possibly gain more power in their respective areas of influence, which would make Montesquieu's Separation of powers a blurred area of law, but as it stands in present day, yes Montesquieu's theory is held up. ...read more.