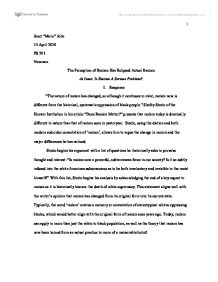 Janet "Marie" John 15 April 2010 PS 201 Newman The Perception of r****m Has Eclipsed Actual r****m At Issue: Is r****m A Serious Problem? I. Response "The nature of r****m has changed, so although it continues to exist, r****m now is different from the historical, systematic oppression of black people." Shelby Steele of the Hoover Institution in his article "Does r****m Matter?" presents that r****m today is drastically different in nature than that of r****m seen in yesteryear. Steele, using the diction and both modern and older connotation of 'r****m', allows him to argue the change in r****m and the major differences he has noticed. Steele begins his argument with a list of questions he rhetorically asks to provoke thought and interest: "Is r****m now a powerful, subterranean force in our society? Is it so subtly infused into the white American subconscious as to be both involuntary and invisible to the r****t himself?" With this list, Steele begins his analysis by acknowledging the end of a key aspect to r****m as it is historically known: the death of white supremacy. This statement aligns well with the writer's opinion that r****m has changed from its original form into its current state. Typically, the word 'r****m' creates a memory or connotation of stereotypical whites oppressing blacks, which would better align with the original form of r****m seen years ago. Today, r****m can apply to more than just the white to black population, as well as the theory that r****m has now been turned from an actual practice to more of a memorable belief. ...read more.

A final response is presented when the author states: "[r****m] as a faith has destroyed out ability to know the reality of r****m in America...a terrible ignorance that will do doubt last until we take race out of every aspect of public life -until we learn, as we did with religion, to separate it from the state." This quote epitomizes my personal opinion that today's r****m cannot be equally compared or measured to that seen during the Civil Rights era. Steele argues that since r****m is now more like a faith, his argument that until it is separated from the state, as with religion, we can never fully put its current form to rest. II. Report In looking for sources of information relevant to the subject of today's r****m, I began my search with the "Further Readings" section included with the original article. After reviewing three periodicals and conducting my own search, I have concluded that while Steele presents a relevant topic of today, his article is seemingly just his opinion, and not one of majority, lowering the legitimacy. Elizabeth Atkins, writer of "Do Light-Skinned Black People Have an Advantage?" article, her argument is based on personal, negative experiences, making the article appear biased, which outweighs any validity that only those with the darkest of skins are still the most highly subjective to r****m. The New York Times published Benedict Carey's "Tolerance over Race Can Spread, Studies Find," in November of 2008, and presents the argument that, like most other social things, people over time accept more than in the past. ...read more.

Overall, my opinion of r****m has changed slightly through my research. While I do continue to agree with Steel's agreement that r****m is drastically different than the form seen in yesteryear, it is still a presence in today's society, I have altered my reasoning by what r****m is here. Originally, r****m was created from whites, direct towards blacks, and was an endless cycle of oppression, hatred, and anger. Today's r****m is not confined to either race, and is no longer in majority. Today's r****m seems to be passed most commonly from parent to child in both of the two original races -if a white person is r****t towards a black person, it is commonly from family feeling that way, and the same applies to blacks, although the foundations are different. I believe that whites today are racists out of tradition, while blacks are racists for revenge from the treatment their elders were subjected to. Neither is justifiably correct, but you can't change someone else's mind. With the research, I have concluded that the average person does not let race infiltrate every aspect of life, but that race is still a major factor in today's society. Hopefully, through more cordial relations and time, race will become the gender, hair or eye color, shoe size or face shape -just another factor that all HUMANS have. Yes, race is practically only skin deep, but we, as humans, should look past and examine what is within as what truly matters. ...read more.