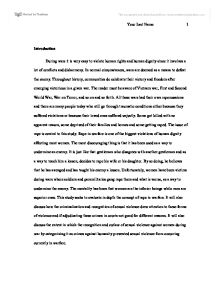 r**e in Warfare and Significance

Introduction During wars it is very easy to violate human rights and human dignity since it involves a lot of conflicts and disharmony. In normal circumstances, wars are deemed as a means to defeat the enemy. Throughout history, communities do celebrate their victory and freedom after emerging victorious in a given war. The reader must be aware of Vietnam war, First and Second World War, War on Terror, and so on and so forth. All these wars had their own repercussions and there are many people today who still go through traumatic conditions either because they suffered violations or because their loved ones suffered unjustly. Some got killed with no apparent reason, some deprived of their families and homes and some getting raped. The issue of r**e is central to this study. r**e in warfare is one of the biggest violations of human dignity affecting most women. The most discouraging thing is that it has been used as a way to undermine an enemy. It is just like that gentleman who disagrees with another gentleman and as a way to teach him a lesson, decides to r**e his wife or his daughter. By so doing, he believes that he has avenged and has taught his enemy a lesson. Unfortunately, women have been victims during wars where soldiers and paramilitaries gang r**e them and what is worse, as a way to undermine the enemy. The mentality has been that women are the inferior beings while men are superior ones. This study seeks to evaluate in depth the concept of r**e in warfare. It will also discuss how the criminalization and recognition of s****l violence drew attention to these forms of violence and if adjudicating these crimes in courts not good for different reasons. It will also discuss the extent in which the recognition and outlaw of s****l violence against women during war by categorizing it as crimes against humanity prevented s****l violence from occurring currently in warfare. ...read more.

General Taguba also held that the photos contained images of r**e, torture, abuse and all sorts of indecency. It was held that the claims by President Obama in justifying the suppression of the photos in that they would not be sensational as it would be with the painful images remembered from Abu Ghraib (Eley 5). Additionally, the General held that there are 2,000 photos containing approximately 400 scenarios of US forces assaulting Iraqis and Afghans in different prisons (Eley 6). It is also believed that both Bush and Obama administration have blocked the publication of the pictures. President Obama noted that if the images would be released the direct consequence would be to trigger anti-American public opinion and endangering American troops (Eley 6). Moreover, it is also held that the main reason as to why President Obama declined to release the photos is because the US generals had also opposed their publication. However, Bryan Whiteman, who is Obama Pentagon Spokesman, expressed that the images did not contain acts of r**e and that the images had been mischaracterized (Eley 7). In the same vein, Obama held that the torture depicted in the images had been committed by "a small number of individuals". It is held that apart from the 2,000 photographs of torture there are still more cases that might not have been captured. Again, torture and r**e among prisoners can be interpreted as the "systematic policy of the US military and Central Intelligence Agency (CIA)" in that it derived from high levels of senior government (Eley 8). It is also noted that Saddam Hussein abducted girls from Thailand and elsewhere to service the Iraqi soldiers since they could not use their wives for religious reasons (American Chronicle 2). There have been concerns as to the whereabouts of the women who might have survived the assaults of Iraqi's army. On interviewing several Asian women and girls who were prostituted to the US forces, an Okinawan girl expressed that she cannot forget the mass r**e by soldiers. ...read more.

And finally, the decision to go to war must be as a last resort after all other options have been considered. Conclusion As can be seen, use of r**e in warfare poses a global challenge since almost all countries have a history of such atrocities. There is a need to have laws that criminalize s*x violence during wars and r**e should never be used as a military strategy. The study has also discussed in detail cases of s****l violence in various countries and the adverse effects thereof. There are major issues that have come out strongly, for instance; that use of r**e in warfare was a way to humiliate or intimidate the enemy, women are the most vulnerable and that s****l violence against women favors the superior party. In this regard, r**e in warfare is not only a way to humiliate the enemy but it is also a discriminative course of action just as how the powerful may devalue the minors. The study has also established that r**e in warfare has not been a thing of the past only as there are many cases of r**e today like in the case of Congo and Sudan. This is what led this study to state that albeit laws to prevent s****l violence against women some of it is still evident today. The study also established that adjudicating s****l violence crimes in courts may not be a good reason only if it is based on speculation. Additionally, women have been mistreated due to the traditional understanding about the role of women in the society. They have been taken as inferior beings almost to a point of denying them basic rights. It is at this point that this study wishes to state that: Injustices committed during past wars should never be brushed under the carpet. Once human dignity is violated the impact is forever and so there can be no permanent way to restore it. Therefore, the issue of r**e in warfare should be categorized as crime against humanity as this is the only way to prevent it from occurring and to make culprits take up responsibility. ...read more.