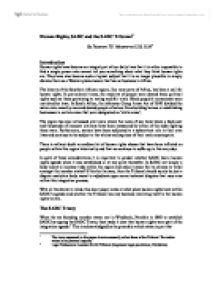 Human Rights, SADC and the SADC Tribunal1 By Tazorora TG Musarurwa LLB, LLM2 Introduction Human rights have become an integral part of our daily lives that it is rather impossible to find a single person who cannot tell you something about what they think human rights are. They have also become such a topical subject that it is no longer plausible to simply dismiss them as a Western phenomenon that has no business in Africa. The history of the Southern African region, like most parts of Africa, has been a call for human rights. In pre-colonial times, the majority of people were denied basic political rights such as those pertaining to voting and fair trials. Black people's movements were restricted by laws. In South Africa, the infamous Group Areas Act of 1950 divided the nation into areas by race and denied people of colour from building homes or establishing businesses in certain areas that were designated as 'white areas'. The region has also witnessed civil wars where the rules of war have taken a back seat and thousands of innocent civilians have been massacred by either of the sides fighting those wars. Furthermore, women have been subjected to a subservient role in their own lives and continue to be subject to the whims and caprices of their male counterparts. ...read more.

Agents for Zimbabwe argued that the Tribunal had no jurisdiction to entertain the matter as the SADC Treaty only had human rights as principles but did not have the actual standards upon which Member States' conduct could be measured by. They further argued that were the Tribunal to borrow these standards from any other jurisdiction, it would be tantamount to legislating on behalf of member states.6 The Tribunal dismissed these arguments and ruled that it could entertain the matter as Article 21(b) of the Tribunal Protocol allowed it to have regard to "applicable treaties, general principles and rules of public international law" it could look elsewhere where the Treaty was silent. In essence the Tribunal ruled that Zimbabwe's land reform programme as provided for by S16B(3) of the Constitution of Zimbabwe denied the applicants access to justice, was racially discriminatory and violated international law in its failure to provide for compensation. In so doing it was a violation of the SADC Treaty. Correctness of the Campbell decision Whether any decision can be considered to be correct or not will obviously depend on the commentator. Criticisms on the Campbell decision include the argument that the principles which were relied upon by the Tribunal are not legally enforceable obligations. The question therefore is whether the Tribunal should have found the principle of human rights as creating rights and duties between the parties. ...read more.

SADC member states should now take the lead and develop a human rights protocol. At the end of the day it is citizens that must benefit from regional groupings and leaders should not be seen as fighting against the tide of human rights. Conservative positivists may thus have problems with the approach taken by the Tribunal, but those who believe in a judicially active bench that stands to promote, protect and respect human rights will appreciate the contribution made by the Tribunal to human rights jurisprudence. 1 The views expressed in this paper do not necessarily reflect those of the Tribunal. The author writes in his personal capacity. 2 Legal Professional Assistant SADC Tribunal (Registered legal practitioner, Zimbabwe). 3 SADC was founded by Angola, Botswana, Lesotho, Malawi, Mozambique, Namibia Swaziland, Tanzania, Zambia and Zimbabwe. 4 See Ruppel and Bangmwabo, 'The SADC Tribunal: A legal analysis of its mandate and role in regional integration' Monitoring Regional Integration in Southern Africa Yearbook Vol 8 2008 213. 5 SADC (T) Case No. 2/2007. 6 P 23 of the judgment. 7 Unreported suit, Reference No. 1 of 2007, Judgement of the EACJ delivered on 1 November 2007. 8 See also Solomon T. Ebobrah 'Litigating human rights before sub-regional courts in Africa: prospects and challenges' 17 RADIC (2009) 82. And also Christpher Mbazira 'The human rights jurisdiction of the East African Court of Justice - The James Katabazi case' Occasional Paper of the East African Law Society. ?? ?? ?? ?? ...read more.