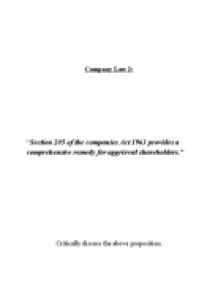 Section 205 of the companies Act 1963 provides a comprehensive remedy for aggrieved shareholders. Critically discuss the above proposition.

﻿Company Law 2: ?Section 205 of the companies Act 1963 provides a comprehensive remedy for aggrieved shareholders.? Critically discuss the above proposition. Introduction: The principle of majority rule is enshrined in company law. While the law recognises that it is the right of the majority shareholder?s to conduct the company?s business in what they see as its best interests, it often happens that a majority may behave in a manner which is damaging to the interests of a minority of members. Therefore, the law has developed protection for the minority under both the common law and through statute provisions[1]. Section 205 of the Companies Act 1963 has become the primary outlet for aggrieved petitioners. It has had significant influence in reducing the total control majority shareholders and director?s initially had at their disposal, and has enabled the minority shareholders with the ability to effect change where they would have been incapable of doing so before. Nonetheless, s 205 is limited in its scope, and its application can be invariably restricted. Prior to the enactment of this provision, shareholder? grievances within a company were governed by the general rule established in Foss v Harbottle[2], which protects companies and their separate legal identity from claims of adverse conduct. This rule ensures that only a company may institute proceedings in respect of wrongs done to it, and it set limits to the right of an individual member of a company to sue upon such an assertion. Under this rule, exceptions allow a minority shareholder to bring a personal, representative or derivative action against a company on the basis of an alleged wrong. Yet due to the nature of this rule and the responsibility of the courts to ensure that the floodgates remain firmly closed, it would seem as though there is a necessity to favour the legal over the natural person[3]. Unless a shareholder could bring himself within one of the exceptions to the rule, his only remedy (prior to the enactment of s 205) ...read more.

Section 205(3) states that where s 205 (1) applies, that the court may ?make such orders as it thinks fit, whether directing or prohibiting any act, or cancelling or varying any transaction??. This indicates that the court may exercise its powers in relation to any act, whether it is an isolated act or a continued course of conduct. This was illustrated in Re Westwinds Holding Company Ltd[19], where Kenny J. held that the sale of land at such a gross undervalue was completed in an oppressive manner, and it was on that ground, and ?that ground alone? sufficient for the exercise of the powers of the court under s 205(3)[20]. Furthermore, in stating that the court must make orders with a ?view to bringing to an end the matters complained of?, s 205(3) suggests that the conduct of the affairs of the company, the exercise of the directors? powers, or the matters complained of, must be on-going up to the date of presenting the petition[21]. It has been held that fraudulent and unlawful transactions can constitute oppressive behaviour, despite the effort to confine s 205 to conduct that is beyond a legal resolution. Again, in Re Westwinds Holding Company Ltd[22], the court found that the applicant shareholder had had his signature forged by the other shareholder who executed the transfer of deeds of company land. This case is encouraging as it resulted in the court ordering the offending shareholder to purchase the applicant shares at a value that they would have been, had the fraudulent transactions not taken place. Consequently, this embodies a precedent for aggrieved members to seek a comprehensive remedy under s 205 where acts of fraud are committed. An important issue which arises under s 205 is the extent to which oppressive management can amount to maltreatment. As aforesaid, there is no limit to the wording of s.205 that oppression can only be suffered by a member in his capacity as member.[23]In Irish Press Plc v Ingersoll Irish Publications Ltd[24], the ...read more.

Nonetheless s.205 is not easily employed, and it consists of several restrictive measures to ensure that there is no abuse of the remedial process, including confining petitions to those which come as a consequence of company affairs and powers of directors. Each of these elements are central to s.205 and give the statute provision its significance, yet there are certain aspects outlined above which preclude s.205 from being a comprehensive remedy. Ambiguity still exists with regard to the availability of s.205 redress where the illicit behaviour transpires as a result of mere incompetence. This can be problematic for an aggrieved shareholder as it is difficult to show malevolence where it does not exist. However, Keane argues that such a loophole might not exist in Ireland as it does under the British jurisdiction, and that where conduct, be it incompetent or deliberate, has serious detrimental consequences for the applicant, such behaviour could be reasonably described as oppressive even where the oppressor genuinely believed what they were doing was right.[41] More specifically, petitions that involve quasi-partnership companies can be difficult to resolve as aforementioned, and s.205 redress can often be ineffective. Liquidation can often result in the sale of the assets at break-up value without regard to goodwill and the know-how of the company members. A winding up by the court can also be lengthy and costly, and it may be that the only available purchasers are the very majority whose oppression had compelled the minority to seek redress.[42]Nevertheless, where a court cannot end the matter in question under s.205, then it is obligated to employ the residual jurisdiction under s213(g) to wind up the company. In conclusion, it cannot be denied that section 205 has been effective in redressing the inequality for parties dealing with companies, however only insofar as is in keeping with pre-existing case law and company law statutes. As a whole, it endeavours to redress all shareholder grievances that develop, however it is overly restricted and perhaps not as important a remedy as it could otherwise be. ...read more.