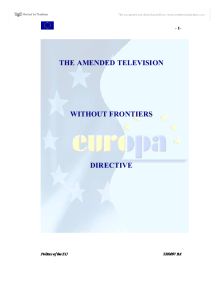 The amanded Television without frontiers directive

THE AMENDED TELEVISION WITHOUT FRONTIERS DIRECTIVE Television without frontiers directive: it sounds quite like an international organisation providing TVs for poor people. Actually, not at all; this directive emanated from the European Commission in 1984 (but changed until 1989) and came into effect in October 1991.This directive comes within the scope of the broadcasting and audio-visual policy of the early eighties following the Hahn report on Radio and Television Broadcasting in the European Community .It supports that mass media and television are instruments through which the Community could become a 'genuine political' and unification could be advanced. The European Parliament adopted the report which then emphasised on the importance of new technologies in the audio- visual sphere. This project obviously gave rise to two challenges (stated in the Commission's information paper 1984): * The harmonisation of television transmission standards, * Fostering television programme production. (Richard Collins) Several forces played a major role in the establishment of such a directive and before stating what were the main issues regarding television without frontiers, it is helpful to explain what that directive is about and why European Institutions decided to set it up. Later on, I will explain how the European Union set up the directive and more generally the whole audio-visual and broadcasting policy dealing with its opponents and the different debates it implied. ...read more.

Income from this market is expected to grow by 70% by 2005, and that would be reflected in the creation of more than 300,000 highly qualified jobs during that period (Norcontel ltd: Commission of the European Communities, 1999: p 2). * This is a 'great expectations' policy but how did the EU set it up?.... Obviously, the directive has not been established within few days, and the new ideas it brought out have been put into effect thanks to different mediums. Different institutions played a major role in the establishment of the directive and programmes have been set up to provide a well functioning policy such as the MEDIA programmes (MEDIA 92 and MEDIA 95). Basically, the Community's broadcasting and audiovisual policy focused on three main points: * Hardware (setting of TV transmission standards) * Software (production and distribution of films and TV programmes) * Restructuring and harmonisation of the TV broadcasting market. Once these objectives are set up, four directorates who mostly influenced the evolution of the policy were in charge to make that policy function.: 1. Internal market and Industrial Affairs (DG III) 2. Competition (DG IV) 3. Audiovisual, information, communication and culture (DG X) 4. Telecommunications, information, industries and innovation (DG XIII) DG III was the lead directorate for the community's most strike initiative in the media field: TWF.(Commission of the European Communities , 1984 a). ...read more.

Actually, Jack Valenti did not have to fear the directive because it completely failed regarding the quotas, USA could still deliver their culture through DVDs, Internet etc... So it was not worse preventing European channels to broadcast American TV programmes even if for France it has been a success regarding the radio (a 40% quota on American-English speaking- music broadcasted on French radios). Still, despite its intention to create a single European television market, the most important effect of the TWF directive has been to increase competition within the national television markets of Community member States. It has also encouraged technological and regulatory changes over the last decade but it has not been sufficient to create a single market which still does not exist. As there is no consensus in the European Community, there is a plan to establish a new TWF directive. As far as I am concerned, I think that allowing European Community to compete with the United States in the audiovisual domain is probably one of the best ways ever because of the technological challenge, but quotas are not to be respected and we can see that now, American TV programmes are very present in European broadcasts. Still in my opinion, the aim to develop a European culture is partly reached but we still tend to be filled with American culture and I think no quotas could fight against it. 'The culture industry will tomorrow be one of the biggest industries... ...read more.