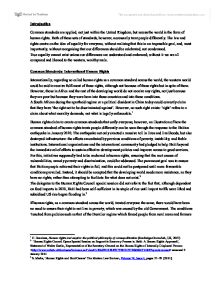 The application of common standards necessarily treats people differently, privileging some and penalising others. Thus it becomes an imposition of homogeneity, not an acceptance of difference. Discuss

Introduction Common standards are applied, not just within the United Kingdom, but across the world in the form of human rights. Both of these sets of standards, however, necessarily treat people differently. The law and rights centre on the idea of equality for everyone, without realising that this in an impossible goal, and, most importantly, without recognising that our differences should be celebrated, not condemned. True equality cannot exist unless our differences are understood and embraced; without it we are all compared and likened to the western, wealthy male. Common Standards: International Human Rights Internationally, regarding so called human rights as a common standard across the world, the western world could be said to receive fulfilment of these rights, although not because of these rights but in spite of them. However, those in Africa and the rest of the developing world do not receive any rights, not just because they are poor but because they were born into those countries and into those conditions. A South African during the apartheid regime or a political dissident in China today could correctly claim that they have 'the right not to be discriminated against'. However, no such right exists: 'right' refers to a claim about what morality demands, not what is legally enforceable.1 Human rights claim to create common standards that unify everyone; however, an illustration of how the common standard of human rights treats people differently can be seen through the response to the Haitian earthquake in January 2010. The earthquake not only exacted a massive toll in lives and livelihoods, but also destroyed infrastructure: the effects exacerbated by previous conditions of poverty, instability, and feeble institutions. ...read more.

University spokesman Don Carleton said: "A student who happens to be excellent at a subject in an under-achieving school may have the same academic potential as somebody in one of the best public schools in Britain, but without the libraries, laboratories and devoted staff may not achieve the same A level grades." In contrast, a way in which common standards should treat people the same is with regard to the system of criminal law; people of all backgrounds being equals in the eyes of the law. However, as we have recently seen with regard to the aftermath of the MP expenses scandal, MPs may receive the same sentences as the general public but will not serve the same term; a privilege that has been previously shared by celebrities. It has been seen that the ex-Labour MP, David Chaytor could be released as early as May 2011, despite receiving a prison sentence of 18 months for fiddling expenses in January 2011. Many are saying that this is too short a period in prison; amounting to only a third of his sentence. This is emphasised even more since the judge extended his sentence because of the breach of trust involved. As his offence is neither violent nor s****l, he is eligible for Home Detention Curfew and electronic tagging for 16 weeks. He could reduce his sentence even more on appeal, though it is doubtful that he has time to get an appeal into court. He is still unlikely to serve no more than 20 weeks.11 This further confirms that, even within the realms of the criminal law, common standards privilege some, the rich, and penalise others, the poor. ...read more.

women go to women with little training in an unsterile location, where, if the law accepted other cultures, the operation could be carried out by trained professionals in a safe environment. The World Health Organisation has further tried to manipulate the view on female circumcision through using the word 'mutilation'. It could be said, therefore, that we mutilate our bodies with piercings and tattoos, but these are not banned because the developed world carries out these practices.20 The 'mutilation' is known to be practised in at least 25 countries in Africa and, outside Africa, a certain form of female genital mutilation exists in Indonesia, Malaysia and Yemen. Recent information has revealed that the practice also exists in some European countries and Australia, among immigrant communities. It is difficult to see why, if the procedure is so widespread, it cannot be carried out under the protection of the law.21 Conclusion Every individual is different and so, by definition, common standards will treat people differently. Examples have been seen with regard to both the gender and background divides, where the law and rights have tried to eradicate discrimination, failing at every turn. Human rights have been the most significant attempt at creating worldwide common standards and, in this way, can be seen as the biggest failure. Human rights privilege their male creators in the western world, penalising women and the poor, most tragically those in the developing world. The only way we can maintain our living standards in the west is through the damnation of the rest of the world, emphasising our differences rather than embracing them: this will never change. ...read more.