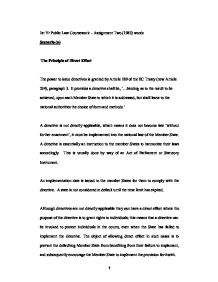 The Principle of Direct Effect

1st Yr Public Law Coursework - Assignment Two (1983) words Scenario (a) The Principle of Direct Effect The power to issue directives is granted by Article 189 of the EC Treaty (new Article 234), paragraph 3. It provides a directive shall be, '...binding as to the result to be achieved, upon each Member State to which it is addressed, but shall leave to the national authorities the choice of form and methods.' A directive is not directly applicable, which means it does not become law 'without further enactment', it must be implemented into the national law of the Member State. A directive is essentially an instruction to the member States to harmonize their laws accordingly. This is usually done by way of an Act of Parliament or Statutory Instrument. An implementation date is issued to the member States for them to comply with the directive. A state is not considered in default until the time limit has expired. Although directives are not directly applicable they can have a direct effect where the purpose of the directive is to grant rights to individuals; this means that a directive can be invoked to protect individuals in the courts, even when the State has failed to implement the directive. ...read more.

As the purposive approach to interpretation is more widely used in Europe than it is in the UK, judges in UK courts are less willing to 'read-in' words to national legislation in order to comply with the objectives laid down in EC directives. However, in Pickstone v Freemans Plc [1989] AC 66 the House of Lords was prepared to adopt a purposive construction to the Equal Pay Act 1970 in order to make it comply with the UK's legal obligations under the Equal Pay Directive. Lord Oliver commented, "...a construction which permits the section to operate as a proper fulfilment of the UK's obligation under the Treaty involves not so much doing violence to the language of the section as filling a gap by an implication which arises, not from the words used, but from the manifest purpose of the Act and the mischief it was intended to remedy." A directive cannot have direct effect until the time limit has elapsed; this was established by Publico Ministero v Ratti [1979]8 in which the claimant sought to invoke two harmonization directives before their allocated implementation period had elapsed. The Court held that until the time limit for implementation had expired the directives could not have direct effect. ...read more.