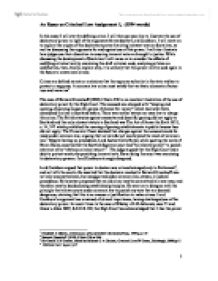 In this essay I will start by defining crime. I will then use case law to illustrate the use of declaratory power in light of the arguments forwarded by Lord Cockburn. I will move on to explore the origins of the declaratory power by citing relevant texts on Scots law, as well as discussing the arguments for and against use of this power. I will also illustrate how judges use their discretion in ensuring immoral acts are brought to justice. While discussing the development of Scots law I will move on to consider the effects of codifying criminal law by examining the draft criminal code, analysing articles on codification; then, finally, explain why, it is unlikely that this power will be used again in the future to create new crimes. Crimes are defined as acts or omissions that the supreme authority in the state wishes to prevent or suppress. A common law crime must satisfy the two basic elements of actus reus and mens rea1 The case of Bernard Greenhuff (1838) 2 Swin 236 is an excellent illustration of the use of declaratory power by the High Court. The accused was charged with "keeping and opening of gaming houses for games of chance for money" which had never been considered a crime in Scotland before. ...read more.

Criminal law was also extended in S v H. M Advocate 1989 SLT. 469, where it was decided that a man can now be guilty of r****g his wife12contrary to Hume's commentaries. When the courts want to convict but lack the authority of precedence or statute, they have used the same principle to claim that the act was always a crime, but hasn't been charged before, or that it's a modern way of committing an old crime. The principle was used in W Fraser (1847) Ark 280, where the crime of fraud was extended to include intercourse by deception.13 Likewise, in Charles Sweenie (1858) 3 Irvine 109 though the charge of r**e did not apply, it was decided that having intercourse with a woman in her sleep was an immoral act, that should be punished. In H.M Advocate v Wilson 1984 S.L.T. 117 the crime of 'malicious mischief' was extended to include economic damage. By doing so, judges are playing a major role in law reform. Other ways are by redefining law to suit changes in society especially when gaps in the law are used by criminals to defend their actions. As illustrated in the case of Charles Sweenie 'ibid' the crime of r**e was redefined to be"without her consent"14 as decided in Re: Lord Advocate's Reference (No 1 of 2001) ...read more.