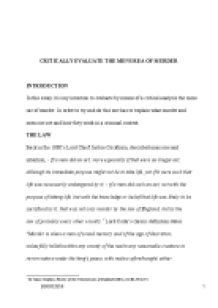 In this essay it is my intention to evaluate by means of a critical analysis the mens rae of murder.

﻿CRITICALLY EVALUATE THE MENS REA OF MURDER INTRODUCTION In this essay it is my intention to evaluate by means of a critical analysis the mens rae of murder. In order to try and do this one has to explain what murder and mens rae are and how they work in a criminal context. THE LAW Back in the 1800?s Lord Chief Justice Cockburn, described mens rae and intention, - If a man did an act, more especially if that were an illegal act, although its immediate purpose might not be to take life, yet if it were such that life was necessarily endangered by it, - if a man did such an act, not with the purpose of taking life, but with the knowledge or belief that life was likely to be sacrificed by it, that was not only murder by the law of England, but by the law of probably every other country.[1] Lord Cook?s classic definition states: "Murder is when a man of sound memory and of the age of discretion, unlawfully killeth within any county of the realm any reasonable creature in rerum natura under the king's peace, with malice aforethought, either expressed by the party or implied by law. ...read more.

In Woollin[10] the appeal was allowed and a conviction of manslaughter was substituted in this case. When we take a look at Smith[11], there was no evidence that Smith intended to kill the police officer, but through his actions it was clear that he had intended at the very least, to cause grievous bodily harm which means no more and no less than really serious injury[12], thus fulfilling the criteria for the charge of murder against Smith. For the offence of murder to be complete, intention does not require premeditation or ill will, as all that has to be proved is either an intention to kill or an intention to cause grievous bodily harm[13]. Although a motive may well be relevant in cases of murder, it does not prove intention[14]. Nedrick[15] and Woollen[16] are the most relevant precedents on the subject of mens rae in murder. In Nedrick[17], D set a house alight, resulting in the death of a child. As the question of his intention was paramount to the case, the question was asked, was death or serious bodily harm a virtual certainty (barring some unforeseen intervention) ...read more.

In a particularly topical case of Hull[27] Coffey says: Hull illustrates the importance of taking into account the particular intent required by the statutory definition of the offence charged in the indictment. While the accused may have intended to pull the trigger intentionally he may not have had the intention to kill or cause serious bodily harm when he pulled the trigger. This pertains to the fundamental issue as to whether he pulled the trigger accidentally (inadvertence) or intentionally (advertence). Intention relates to a particular consequence, that is, to the specific offence charged, and cannot be established by proving recklessness[28]. The Law Commission report on murder, manslaughter and infanticide[29] goes on to say, at Para 1.8: The law governing homicide in England and Wales is a rickety structure set upon shaky foundations. Some of its rules have remained unaltered since the seventeenth century, even though it has long been acknowledged that they are in dire need of reform[30]. If a defendant is to be convicted of the most serious of crimes, ?the taking of a life? surely he /she is entitled to the knowledge of what his actions may been seen as before he commits the crime and one can only hope that a change and simplification of this little understood term comes sooner rather than later. ...read more.