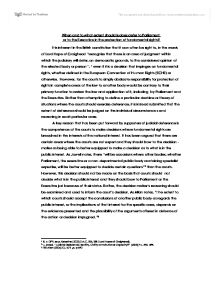 When and to what extent should judges defer to Parliament or to the Executive in the protection of fundamental rights?

When and to what extent should judges defer to Parliament or to the Executive in the protection of fundamental rights? It is inherent in the British constitution that it can often be right to, in the words of Lord Hope of Craighead "recognise that there is an area of judgment within which the judiciary will defer, on democratic grounds, to the considered opinion of the elected body or person'', 1 even if it is a decision that impinges on fundamental rights, whether defined in the European Convention of Human Rights (ECHR) or otherwise. However, for the courts to simply abdicate responsibility for protection of rights in complete areas of the law to another body would be contrary to their primary function to review the law and application of it, including by Parliament and the Executive. Rather than attempting to define a particular doctrine or theory of situations where the courts should exercise deference, it is instead submitted that the extent of deference should be judged on the individual circumstances and reasoning in each particular case. A key reason that has been put forward by supporters of judicial deference is the competence of the courts to make decisions where fundamental rights are breached in the interests of the national interest. It has been argued that there are certain areas where the courts are not expert and they should bow to the decision-maker as being able to better equipped to make a decision as to what is in the public interest. ...read more.

Indeed, this shows the correct functioning of the separation of powers in this context. Critics have suggested that it is against the doctrine of separation of powers to allow the courts to review policy decisions of Parliament or the Executive. However, this view is unsustainable and fails to take into account that legal issues and policy issues often overlap. As Allan notes, "any question of public policy or public interest may have a legal dimension when its resolution has implications for the rights or interests of individuals particularly affected"9 It is exact role of courts to provide an independent check and balance on the Parliament and Executive, particularly when the boundary between legislature and executive is so negligible due to the domination of the Executive. To apply deference to the level of certain areas would be to give effective carte blanche to the government to trample on fundamental rights, with only a weak Parliament and public opinion to hold them back. This adds to the argument that deference needs to be assessed on a case by case basis. As noted by Lord Steyn, "The truth is that even democratic governments sometimes flagrantly abuse their powers and need to face open and effective justice. If this point needs proof, it is vividly illustrated by events following the armed conflicts in Afghanistan and Iraq."10 It has also been argued that there should be a theory of judicial deference in certain areas so as to protect the notion of parliamentary sovereignty. ...read more.