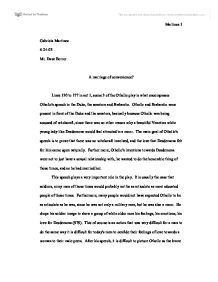 A marriage of convenience? Othello.

Gabriela Martinez 6-24-03 Mr. Dave Borror A marriage of convenience? Lines 130 to 177 in act 1, scene 3 of the Othello play is what encompasses Othello's speech to the Duke, the senators and Brabantio. Othello and Brabantio were present in front of the Duke and the senators, basically because Othello was being accused of witchcraft, since there was no other reason why a beautiful Venetian white young lady like Desdemona would feel attracted to a moor. The main goal of Othello's speech is to prove that there was no witchcraft involved, and the love that Desdemona felt for him came upon naturally. Further more, Othello's intentions towards Desdemona were not to just have a sexual relationship with, he wanted to do the honorable thing of those times, and so he had married her. This speech plays a very important role in the play. It is usually the case that soldiers, army men of those times would probably not be as articulate as most educated people of those times. Furthermore, many people would not have expected Othello to be as articulate as he was, since he was not only a military man, but he was also a moor. He drops his soldier image to show a group of white older men his feelings, his emotions, his love for Desdemona (979). ...read more.

Desdemona is basically letting Othello know that she is interested in him. Even though Othello had difficulty believing that such beautiful creature could love him, which was ultimately his downfall in the play, that's exactly what happened. He is so convincing that even the Duke says that probably even his daughter would have fallen for him. Basically the Duke is saying that he believes him. Everything in Othello's speech showed many aspects of him that might have other wise be passed over by the reader, or by those present who didn't know him and had just made a prejudiced assumption of Othello as a person. For example, his speech shows that despite him being a brave soldier, he is also a well traveled person who also has a level of education probably not expected of some of his class. He also showed that behind the tough and feared soldier there is some one who is capable of falling in love with a woman just as anyone else. This is probably something that not many people would have expected of someone like him. Othello even showed that he is a humble person. Before making his speech, he apologized to the Duke and the Senators by warning them that he probably won't be able to express himself as well as he would like. ...read more.

Thus putting her life in danger just to be with him. The first seed of Desdemona's infidelity is planted by Brabantio. He does this by saying "She has deceived her father, and may thee" Witchcraft was a capital crime that would result, if convicted, in bloody torture and eventually lead to execution. First Othello builds himself through his reputation thus reminding the Duke as well as the senate of his status and importance to them immediately. Once, he has them on his side he then proceeds to speak about his love with Desdemona. PG 23 (This puts the senators on his side) Brabantio is a senator and Duke. So when the Senate rules in favor of Othello then it's a big thing. Why Brabantio wasn't invited not even informed of the emergency meeting??? The senate takes the thought of Brabantio's daughter's death as personally as if she was their own daughter. When it comes down to the meeting then he was even informed. When the senate allows for Othello to speak their hopes are with him in that he better have a convincing speech. First he shows the senate respect by addressing them by their position It is interesting to see that even after this situation. Othello did not learn from this experience. The Duke gave Othello an opportunity to defend himself by speaking up for himself. But later in the story Othello doesn't even consider the same right for Desdemona. Martinez 1 ...read more.