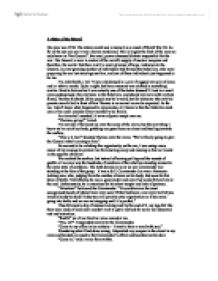 A vision of the future?

A vision of the future? The year was 2150. The whole world was in turmoil as a result of World War III. As far as the eye can see it was a barren wasteland. This is largely the fault of the man we only know as "the General", the cruel, power-obsessed dictator responsible for the war. The General is now in control of the world's supply of nuclear weapons and therefore, the world. But there is still a small glimmer of hope. Unknown to the General, an ever-growing number of individuals had formed the Rebellion, who were preparing for one last stand against him, and one of those individuals just happened to be me. I'm Jake Smith, a tall 17 year old dressed in a pair of ragged, torn pair of jeans and a t-shirt to match. Quite a sight, but here everyone was clothed in something similar. Hard to believe but I was actually one of the better dressed! I lived in a small room underground, like everyone in the Rebellion, and shared my room with my best friend, Thomas Richards. Some people say he's weird, but for someone who saw his parents were killed in front of him Thomas is as normal as can be expected. As for me, I don't know what happened to my parents; all I know is that the Rebellion took care of me and I consider every member to be family. ...read more.

"Well I'm very honoured, but is it not a bit early to be naming your second in command - it could be years before we attack." "No, Jake - we march in three days' time. I want you to use this time to prepare yourself mentally for the challenge ahead." "Uh...ok," I replied lamely as his words sank in. "I'll be letting everyone know at dinner tonight; you don't have to attend if you don't want to. Good day to you, and good luck." And with those final words I left the room and headed straight for my bed, even though I doubted that I would be able to fall asleep. The following morning I woke up to find that Thomas's bed was empty. It was unusual for him to be awake before me, but I thought nothing of it and left to get my breakfast. As I entered the canteen, a murmuring broke out - it appeared Commander Lee had also mentioned that I was second in command. As I looked around at the five hundred or so people that were in the Rebellion, I could see that everyone was experiencing the same feeling - fear. The next two days were spent preparing for the battle and discussing tactics. We were going to attack swiftly and powerfully so that the General would not know what hit him. ...read more.

I've known everything about your little operation for a while now and am going to enjoy crushing you like the ants you are." "Give it up, General. It's all over - either surrender or I will kill you without hesitation!" roared Commander Lee. "I will do nothing of the sort. Do it." There was a gunshot from behind me and Commander Lee fell to the ground, blood pouring from his chest. Thomas had shot him. It became clear all of a sudden. How had I not seen it? The reason I couldn't find Thomas was because he had been reporting to the General the whole time. "Why?" I groaned as my eyes filled up with tears. "I was fed up living that life. Here, I can get a decent meal and live in comfort-not in some hole under the ground," Thomas said malevolently. "Your friends will lose. I will give you a choice - either surrender to me or die," the General said calmly. I actually considered it, but, when I thought of all the people he had killed, I knew what I had to do. I had to kill him. "I'll never surrender to you!" I screamed and I raised my gun - ready to fire. A shot was fired. I looked down and saw a red stain slowly spreading across my t-shirt. I fell to the ground and looked up into Thomas's eyes, as smoke curled out of the end of his gun. As the blackness began to creep in he seemed to mouth, "I'm sorry," and everything faded to black. ...read more.