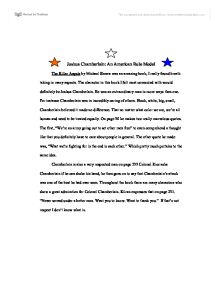 An American Role Model - The Killer Angels by Michael Shaara

Joshua Chamberlain: An American Role Model The Killer Angels by Michael Shaara was an amazing book, I really found breath taking in many aspects. The character in this book I felt most connected with would definitely be Joshua Chamberlain. He was an extraordinary man in more ways then one. For instance Chamberlain was in incredibly caring of others. Black, white, big, small, Chamberlain believed it made no difference. That no matter what color we are, we're all human and need to be treated equally. On page 30 he makes two really marvelous quotes. The first, "We're an army going out to set other men free" to even comprehend a thought like that you definitely have to care about people in general. ...read more.

Throughout the book there are many characters who show a great admiration for Colonel Chamberlain. Kilran expresses that on page 231. "Never served under a better man. Want you to know. Want to thank you." If that's not respect I don't know what is. Another word I think describes Chamberlain is, exhausted. He's been through so much during the duration of the war. From loosing hundreds of men to being shot a total of 6 times, just to name a few things. On page 220 he tells Tozier how worn down his from the war. He's seen so many men die. ...read more.

On page 169 he pats the man on the back and tells him everything will be ok. That segment showed me that Chamberlain has a heart of gold, a deep compassion for the cause if this war. A caring man, a respected man, a tired man, a compassionate man, and wise man at that. This professor was not only a great officer, but also a fantastic man. Through all his hard times, through all his good times he's a man of respect and honor. Everything good that came to him, he deserved 100%. Joshua Lawrence Chamberlain, Colonel of the 20th Maine is an astonishing man in more ways then one. He is a role model to each and every individual of this free and limitless country. I can truly say I admire him. ...read more.