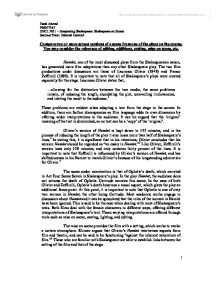 Compare two or more screen versions of a scene from one of the plays on the course - You may consider the relevance of editing, additions, casting, mise-en-scene, etc.

Compare two or more screen versions of a scene from one of the plays on the course. You may consider the relevance of editing, additions, casting, mise-en-scene, etc. Hamlet, one of the most discussed plays from the Shakespearean canon, has generated more film adaptations than any other Shakespeare play. The two film productions under discussion are those of Laurence Olivier (1948) and Franco Zeffirelli (1990). It is important to note that all of Shakespeare's plays were created especially for the stage. Laurence Olivier states that, ...allowing for the distinction between the two media, the same problems remain, of reducing the length, elucidating the plot, unravelling irrelevancies, and relating the result to the audience.1 These problems are evident when adapting a text from the stage to the screen. In addition, there are further discrepancies as film language adds its own dimension by offering wider interpretations to the audience. It can be argued that the 'original' meaning of the text is diminished, as no text can be a 'copy' of the 'original'. Olivier's version of Hamlet is kept down to 155 minutes, and in the process of reducing the length of the play it also loses more than half of Shakespeare's lines.2 In stating this, it is significant that in his intentions, Olivier concludes that his version Hamlet should be regarded as "an essay in Hamlet."3 Like Olivier, Zeffirelli's version lasts only 129 minutes, and only contains thirty percent of the lines. ...read more.

and Dangerous Liasons (1988).10 Helena Bonham Carter is a more flexible actress who, prior to playing Ophelia, had starred in films such as A Room with a View (1986) and Lady Jane (1987).11 Ophelia's death scene indicates as to where the plot of the play is leading. It is clear that in both versions the affect of such a scene creates tension, and indicates the "conflict, which is to follow between characters."12 In Zeffirelli's version, prior to this scene Ophelia's confusion and fear is shown as Hamlet circles around her (Act Three, Scene One, Line 145-50). A point of view shot is used to show that she is trapped in this situation, and that she may not have a way out, other than by dying. Ophelia's grief is a result of her father's death. Due to not being able to express herself, she is becomes childlike and shows signs of an assertive sexuality.13 Her childlike behaviour is illustrated when she hands out flowers. These flowers may indicate that she herself, whether knowingly or not, anticipates her own death. In the same way, Olivier's film gives a close-up that may indicate that she is planning to commit suicide. As she exits the scene, the camera follows. By the time the camera gets to her apartment, she is no longer there. It is at this point that the camera dissolves to the willow scene. In Zeffirelli's version, Ophelia is shown leaving the castle. ...read more.