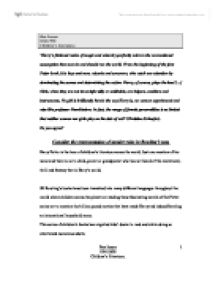 Consider the representation of gender roles in Rowling's text. Harry Potter is the hero of children's literature across the world.

Ben Ireson 03411958 Children's Literature. 'Harry's fictional realm of magic and wizardry perfectly mirrors the conventional assumption that men do and should run the world. From the beginning of the first Potter book, it is boys and men, wizards and sorcerers, who catch our attention by dominating the scenes and determining the action. Harry, of course, plays the lead [...] Girls, when they are not downright silly or unlikable, are helpers, enablers and instruments. No girl is brilliantly heroic the way Harry is, no woman experienced and wise like professor Dumbledore. In fact, the range of female personalities is so limited that neither women nor girls play on the side of evil' (Christine Schoefer). Do you agree? Consider the representation of gender roles in Rowling's text. Harry Potter is the hero of children's literature across the world. Just one mention of his name and there is not a child, parent or grandparent who has not heard of the excitement, thrill and fantasy that is Harry's world. JK Rowling's books have been translated into many different languages throughout the world where children across the planet are reading these fascinating novels of the Potter series not to mention the billion pound movies that have made Harry and indeed Rowling an international household name. This series of children's books has reignited kids' desire to read and while doing so entertained numerous adults. ...read more.

As the Dursleys work hard to get rid of the Hogwarts letters Harry is visited by a Hogwarts employee - Hagrid the giant a keeper of the keys at Hogwarts School. He himself a former pupil who left due to personal reasons but returned to maintain the schools grounds out of loyalty to Dumbledore. He has a passion and gentle affection for dragons, beasts and the sort of magical creatures that others may find terrifying! Despite his rough edges and lumbering appearance, Hagrid is both unquestionable loyal and honest and incredibly protective of Harry. When Hagrid appears, the Dursleys and indeed Harry (at first) are petrified by this giant. 'The door was hit with such a force that it swung clean off its hinges and with a deafening crash landed on the floor'..... As Hagrid proceeded to tell Harry of his life, Mr. Dursley forbade Hagrid to tell Harry truth, fact that he is a wizard. However, Hagrid carries on and takes control of the situation by telling Mr. Dursley to shut up. He shows his power by reaching for a gun and tying it into a knot. Hagrid takes Harry away and explains to Harry he is to be enrolled at Hogwarts school of Wizardry and Witchcraft. Harry asks many questions and you begin to feel that Hagrid almost plays a father figure in the novel. ...read more.

'Hermione let out a great sigh and Harry, amazed, saw that she was smiling, the very last thing he felt like doing. 'Brilliant, 'said Hermione. 'This isn't magic - it's logic - a puzzle. A lot of the greatest wizards haven't got an ounce of logic; they'd be stuck in here forever.' 'But so will we, wont we?' 'Of course not' said Hermione, everything we need is here on this paper'. In a moment of weakness, the female warrior rescues Harry, putting him on an equal level with Hermione. Interestingly all of the bad things that had happened were all ideas of men playing the devious and controlling characters within the novel. Even the headmaster of the school 'Dumbledore' is male with his almost deputy sidekick 'Professor McGonagall' who could be described as a weaker character than the males dominating the novel. I found it interesting how Rowling used these females as a weaker persona but still describes the times that they 'save the story' and the reader's imagination. I think that Rowling was trying to show her readers that although we all face things that seem impossible to overcome, there is always a way out whether male or female, you just need to stick to your guns. Look at her own life she has come through the tough times to a life that is truly phenomenal. ...read more.