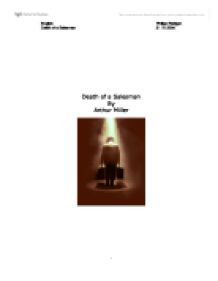 Death of a Salesman By Arthur Miller

Death of a Salesman By Arthur Miller TABLE OF CONTENTS A. Background Information 1. Biographical about Arthur Miller 2. Description of USA at the time Miller wrote this play - social, political and economic conditions. B. Staging 1. Music, lighting and non-realistic staging are all important in the play. Discuss how they are used and what effect. 2. How does Arthur Miller achieve the blending of present reality with dreams of the past and with what success? C. Summary 1. Write a plot summary for Act I 2. Write a plot summary for Act II D. Character Description 1. w***y Loman 2. Linda 3. Biff 4. Happy 5. Bernard 6. Charley 7. Uncle Ben 8. Howard Wagner E. Essays 1. All the principle character in the play are trying to understand what is driving w***y to suicide. What is your understanding of this? 2. How far would apportion the blame for w***y's suicide between w***y's own character and the society in which he lived in? A. Background Information Biographical information about Arthur Miller Arthur Ash Miller was born in New York City on the 17th of October 1915 as the son of a clothing company owner. During the Depression his family lost the business. He visited the University of Michigan where he started his career as a playwright. In 1947 he had his first great success with All My sons. Only two years later he produced his most important piece, Death of a Salesman, which won him the Pulitzer Prize. Death of a Salesman was often referred to as the first great American tragedy and Miller was transformed into a national sensation. The Crucible, a reflection on the anti-Communist hysteria which was going on in the United States during the 1950's. This though resulted in him being summoned to testify in front of the Un-American Activities Committee in 1956 and he was convicted of contempt of Congress for refusing to identify writers holding Communist sympathies. ...read more.

He also cheats on his wife on one of his business trips distorting the relation to his son Biff, who walks in on them. Linda Linda is w***y Loman's wife; she unlike him is loyal and loving to him. She suffers very much under w***y's problems, suicide attempts and his bad relation to their son Biff. Her character is very strong and she stays by w***y's side and supports until and even after his death. She still spreads certain toughness and seems the most realistic. Biff Biff is w***y's 34 year old son and therefore the older one of the two. He follows up on his father's path up to a certain point. He took up w***y's idea of success and tries to be successful in his father's eyes. At a certain point though he frees himself from this and confronts and accepts the miserable reality about his and w***y's lives. He realizes that he is not made for business but wants to work with his hands. A major turning point in this was when he caught his father with another woman. This destroyed all he believed in and he gave up university. He also tries to pass his newly made philosophy back on to his father but instead of considering it, w***y commits suicide. Happy Happy is w***y's 32 year old younger son. His relation his older brother, Biff, seems very good as Biff showed him many things for example how to flirt with girls. Happy seems very superficial and even though he repeats several times that he wants to marry soon, he is a ladies man. He is rather little involved with his family because he always lived in the shadow of Biff. Working as an assistant in a department store, he regards himself as important and only waits for his boss to die in order to step up. Bernard Bernard is Charley's son and a very successful lawyer. ...read more.

Success and a good financial position become one thing for him. He thinks that a house, "well-advertised" machines, a big car and money will open him the way to heaven, which seems rather ironic with his bad financial situation throughout his career. Family values no longer seem to count for him and if he cannot provide his family with enough money he is a loser. That is not how the society displays it, though. The capitalist system of the time the play is set into had an ideology many people did not fit in, w***y, however, tries his best to fit into this society and concentrates very much on popularity and success. All of this w***y never achieves and he sees his dream falling apart. Even though he tries to believe he is a success, narrowed ideology tells him other. It also does not allow him to see what he actually still owns in his life - a family that loves him as a person and not because of the money that he provides them with. Even though Biff, w***y's elder son, who realizes that his whole family has been living in a web of lies, tries to change his father's views, he is unable to because w***y can no longer comprehend it. A great flaw in the modern society is that people are mostly judged by what they possess. Therefore it has become natural for a person to gather material items in order not to be judged as unsuccessful. w***y Loman however has taken this to an extreme, through his distorted ideology he lost everything, including his life. The corrupted version of the American Dream he followed, which his brother Ben had shown him led him into suicide. w***y of course misinterpreted the ideology which the society displayed but in many ways both the society and what he got out of it, had the flaw of materialism in them. Therefore one could say that the society somewhat inspired w***y to create the ideology that drove him into suicide. English Philipp R�diger Death of a Salesman 31.10.2004 - ...read more.