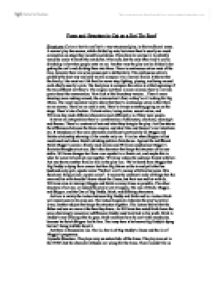 Form and Structure in Cat on a Hot Tin Roof

Form and Structure in Cat on a Hot Tin Roof Structure- Cat on a hot tin roof isn't a very structured play, in this traditional sense. A normal play has scenes, which divided up acts, but since there's usually so much commotion on stage they would be pointless. If you have to analyse it, it probably would be easier to break the acts down. It has acts, but the only other way it can be divided up is by when people enter an act. Another way the play can be divided is by getting the act's and dividing them into three. There is continuous action most of the time, however there are some pauses put in deliberately. The continuous action's probably the best way and only way to compare it to a normal family. It shows that the family, like most real-life families never stop fighting, playing, and being around each other's usually a pain. The best place to compare the action is at the beginning of the two different act three's. The original act three is more relaxed, there's a lot less panic about the conversation. Now look at the Broadway version. . There's more shouting more rushing around; the conversation's fast, as they're all looking for Big Mama. ...read more.

The play is structured around s*x and the gritty side of American upper class family life, and those things in that situation would exist but the problems wouldn't be talked about in open conversation. s*x is one of the main things that holds the structure of the play together so it has to be talked about in the open in the play. There are incidents when people look back into their pasts and talk about the past all the way through the play showing that the past does shape the present, like Maggie talking about Skipper. If Skipper were still alive Maggie would still have the man she fell in love with. If Big Daddy didn't see that mother prostitute her child he probably wouldn't have realised that he's lucky now, and has forgotten how hard life is for others. The flashbacks are about a multitude of things and from the memory's of different characters. Flashbacks show depth of a character and show the amount of time Williams gave to structuring the characters lives and what relation this would have to the other characters and the play. The first look back about three-quarters of the way through act one. ...read more.

It's not just a drama, although it has the key elements of drama. A naturalist play requires the actor to have empathy with a character and think about what they would do if they were them. I don't think this was a naturalistic play because I doubt most normal people would act as the characters acted in this play. It has elements of Greek or Shakespearian tragedy. Greek tragedies were based on exploration of conflict between characters, groups of people or ideas. This idea has now become a popular theme in western theatre. There's conflict and tragedy in every aspect of Cat on a Hot Tin Roof, so it does feature a Greek theme. There is also a theme of Shakespearian tragedy. Shakespearian tragedy involves epic tragedy which means the story may involve a whole person's history or different people's history, spanning across decades of time and set in a number of places. Again, this is used in Cat on a Hot Tin Roof because although it's not set in different places or changes time, characters look back and talk about their pasts. The was a lot of narration, especially from Maggie, Brick, and Big Daddy. There was a strong form of exposition throughout the play. The play was well made and designed. It's not a script where the actors can really put in their own influence. ?? ?? ?? ?? ...read more.