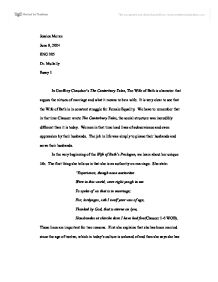 Geoffrey Chaucher's The Canterbury Tales - The Wife of Bath.

Jessica Moran June 8, 2004 ENG 305 Dr. Mullally Essay 1 In Geoffrey Chaucher's The Canterbury Tales, The Wife of Bath is character that argues the virtues of marriage and what it means to be a wife. It is very clear to see that the Wife of Bath is in constant struggle for Female Equality. We have to remember that in the time Chaucer wrote The Canterbury Tales, the social structure was incredibly different than it is today. Women in that time lead lives of subservience and even oppression by their husbands. The job in life was simply to please their husbands and serve their husbands. In the very beginning of the Wife of Bath's Prologue, we learn about her unique life. The first thing she tells us is that she is an authority on marriage. She state: "Experience, though noon auctoritee Were in this world, were right ynogh to me To speke of wo that is in marriage; For, lordynges, sith I twelf yeer was of age, Thonked by God, that is eterne on lyve, Housbondes at chirche dore I have had five(Chaucer 1-6 WOB). These lines are important for two reasons. First she explains that she has been married since the age of twelve; which in today's culture is unheard of and then she says she has been married five times. ...read more.

Here she showed that she had the upper hand because these first three husbands gave her their wealth and to show her independence or simply her power she would deny them her love just because she knew that was where she held the power. She said that these relationships were good but they did not entice her like her fourth and fifth husband did. Wife of Bath wanted power so badly she would accuse her husbands of being unfaithful to her in order for them to bow down to her. She explains this; "Barr I stiffly myne olde housbondes on honed,/That thus they seyden in hir dronkenedde;/And al was fals, but that I took witnedde(Chaucer 386-398 WOB). By doing this her husbands would feel so guilty and try to please her, which made her feel like she was in control. She explains that her fifth husband was different than the rest. He was almost half her age and more importantly she married him for love not money. He would read stories to her that expained the place of a wife was to be the chattel of the husband. One story that drove her angry so wild was when he read; "Of latter date of wives hath he red That some han slain hir housbonded in hir bed And lete hir ...read more.

I do no fors the wheither of the two, For as you liketh it siffiseth me."(Chaucer 1236-1241 WOBT) By giving her the choice she has won. She is an equal in this relationship of marriage. He is not dominant nor is she, a balance is found and this is what the Wife of Bath wants in her own life. By telling this tale of what women want is telling her tale of what she wants. She tries to come across very powerful and even overbearing, but she simply wants a relationship with respect. The tale is important because by giving woman the right to choose, both parties are happy. The knight says: "And whan the knight saugh verraily al this, That she so fair was, and so yong therto, For joye he hente hire in hise armes two. His herte bathed in a bath of clisse, A thousand tyme a-rewe he gan hir kisse, And she obeyed him in every thing That myghte doon hym pleasance or liking. And thus they lyve unto hir lyves ende(Chaucer 1256-1263 WOBT) In the end the Wife of Bath is not a woman who hates men and wants to make their lives miserable. She is a woman who wants equality. We see underneath all of her trickery and cleverness and even vulgarity she longs for a happy equal marriage. ...read more.