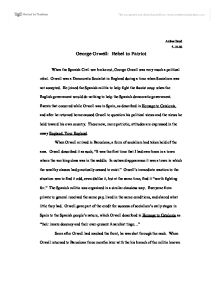 Amber Boyd 5-10-02 George Orwell: Rebel to Patriot When the Spanish Civil war broke out, George Orwell was very much a political rebel. Orwell was a Democratic Socialist in England during a time when Socialism was not accepted. He joined the Spanish militia to help fight the fascist coup when the English government would do nothing to help the Spanish democratic government. Events that occurred while Orwell was in Spain, as described in Homage to Catalonia, and after he returned home caused Orwell to question his political views and the views he held toward his own country. These new, more patriotic, attitudes are expressed in the essay England, Your England. When Orwell arrived in Barcelona, a form of socialism had taken hold of the area. Orwell described it as such, "It was the first time that I had ever been in a town where the working class was in the saddle. In outward appearance it was a town in which the wealthy classes had practically ceased to exist." Orwell's immediate reaction to the situation was to find it odd, even dislike it, but at the same time, find it "worth fighting for." ...read more.

members for being allies of the fascists. Despite the tensions between the militia and the army, Orwell still has faith in and respect for the Spanish people. Orwell gives an account of an instance where he must retrieve a letter from the police department. He goes to a Popular Army officer to receive help. When the officer got the letter, he shook hands with Orwell. Orwell describes this moment as "a strange and moving thing." All of the propaganda of the time was treating all members of the P.O.U.M. as fascist spies, and this soldier was shaking hands with the enemy. Orwell calls instances like this "typical of Spain-of the flashes of magnanimity that you get from the Spaniards in the worst of circumstances." He says at a later point in the book that the generous nature of the Spanish "makes one hope that in Spain even fascism may take a comparatively loose and bearable form." All of the occurrences described in this essay help contribute to Orwell's newfound patriotism when he returned to England. When Orwell wrote England, Your England, the British had just entered World War II, and Orwell had just returned from Spain. ...read more.

Possibly the most important thing contributing to Orwell's changed attitude could be the homesickness anyone would feel after being in a foreign country for an extended period of time. At the end of Homage to Catalonia, Orwell describes an English countryside as "the sleekest landscape in the world. It is difficult when you pass that way...to believe that anything is happening anywhere". A major theme in England, Your England is the traits that the English share with no one else. English people have a language, customs, and general characteristics in common with no European country. After a time in Spain, Orwell was probably glad to return to the comforts of home. One of best analogies Orwell gives for England is that of a Victorian family with "not to many black sheep but its cupboards bursting with skeletons." The young are not taken seriously, and the power is in the wrong hands, but it is still a family. "It has a private language and its common memories, and at the approach of an enemy it closes its rank." While not quite patriotic, this parallel is definitely more loyal than the typical Orwell writing. While bombs were falling in Orwell's home, siding with his "family" may have seemed more important to him than any differences that existed among them. ...read more.