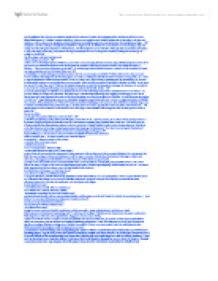 Iago is a powerful predator who exploits those around him by infecting their perceptions of truth with carefully chosen fallacy.

When the slightest hint of doubt or suspicion is planted into someone's mind, the damaging effect of jealousy is left to ensue. William Shakespeare's "Othello" supports this idea. Jealousy and suspicion are Othello's major flaws throughout the play and foreshadow to the audience the eponymous hero's imminent downfall brought about by his ancient, the manipulative Iago. NP Shakespeare uses the technique of beginning "Othello" at night and in the middle of a conversation to create intrigue. Iago and Roderigo are discussing the elopement of Desdemona, who Roderigo loves, and Othello. Although this conversation takes place at a very early stage in the play, it is evident that Iago is manipulative and cunning as he is already taking full advantage of Roderigo's wealth: NP "That thou, Iago, who hast had my purse As if the strings were thine". NP The first word we hear Iago speak is "Sblood", a powerful word conveying his fury and hate. Iago tells Roderigo the reason he is angry is because Othello has appointed Michael Cassio the position of lieutenant instead of him: "One Michael Cassio, a Florentine... That never set a squadron on the field". It is clear Iago thinks Othello has made a mistake in his decision as Cassio is not only inexperienced, but he is from Florence. NP Iago's inability to contain his rage is further revealed when he vows revenge on Othello: "I follow him to serve my turn upon him". He admits to Roderigo that he has only agreed to continue working for Othello so that it is easier to avenge him. Another one of great significance follows this statement: "I am not what I am". Iago is freely confessing that he is definitely not "honest ", he is merely putting on an act for his plan to be successful. When he later questions Desdemona's fidelity to Othello, he says: "Men should be what they seem". ...read more.

The play is named after one of the main characters who has a fatal flaw. The character in question is Othello, the Moor of Venice, a believing and honourable member of the Venetian community and a general of the Venetian army. Although the play was named after Othello, Shakespeare brings in a true villan whose name is Iago. At the time Spain was Englands enermy and Iago being a Spanish name makes the audience sure that Iago is evil. Iago could arguably be the main character, making the play a tragedy which is a play in which characters must struggle with circumstances in which most meet death and despair which in this case the Moor's torture and eventually his, and other innocent characters' demise. Shakespeare seems to suggest in this play that white Iago is a very negative character and Othello the black general is the hero. This would have been at a time when much of England would have questioned these views. Shakespeare may have been trying to make a social comment and putting forward a negative attitude towards racism. The story is based around a tale by the Italian writer Giraldi Cinthio. It begins in Venice, a `nice', civilised city, and moves to the chaotic war in Cyprus. This change has a lot of significance and relevance in the play because it symbolises the changes in Othello's life and perceptions. Cyprus is an island that is exposed and can be easily attacked which brings in irony when Othello moves there Iago's plan succeeds. The play begins with a conversation between Iago and a Venetian nobleman Roderigo. They are discussing about how Desdemona, whom Roderigo loves, has eloped with Othello. Through this early conversation it is evident that that Iago is manipulative and cunning as he is already taking advantage of the rich and love struck Roderigo, whose money he has full use of: "Thus do I ever make my fool, my purse.." ...read more.

Othello from Othello saying life would be chaos if Desdemona wasn't there at the beginning of the scene to damn her, get heraway from me and kill her at the end. This really starts the tragedy with the audience now knowing that evil Iago's plan has worked and the play will have a tragic ending, This builds up the tesnion as well, because the charaters in the play still refer to Iago as "honest" when the audience can see plainly he is not. The handkerchief scene is another important scene in Othello. The scene is full of tension, which Shakespeare keeps on cleverly adding to, to bring more furore from the audience. This tension is brought about by Desdemona speaking for Cassio which compounds Othello's fears and at the same time Othello asking for the handkerchief bringing in dramatic irony creating tension. Throughout the scene, Othello gets more and more desparate making the audience sit on the edge of their seats even more and then at the same time Desdemona interrupting with words for Cassio. Here you can see that, even though Desdemona keeps on denying it, Othello won't rest and keeps on asking her, showing how well Iago has worked up Othello with evil lies.This scene and the temptation scene bring the play up to its climax full of dramatic tension Shakespeare has cleverly made. Lots of Iago's motives were based on suspicion and his truly wicked and cunning ways forced Othello's weakness to come from him - jealousy. Othello changed during the play from a polite general to a badly spoken murderer all because Iago thought Othello may have slept with his wife and Othello didn't promote him but Cassio. In this play Iago was prepared to ruin and end peoples' lives just because of his jeaousy. His motives were small and his actions huge and horrific. So what most people would wonder and what Othello asked on the brink of death was: "Why hath thou thus ensnar'd my soul and body?" ...read more.