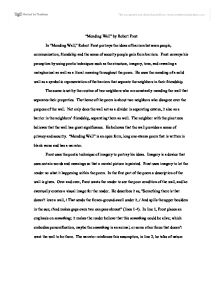 "Mending Wall" by Robert Frost In "Mending Wall," Robert Frost portrays the ideas of barriers between people, communication, friendship and the sense of security people gain from barriers. Frost conveys his perception by using poetic techniques such as the structure, imagery, tone, and revealing a metaphorical as well as a literal meaning throughout the poem. He uses the mending of a solid wall as a symbolic representation of the barriers that separate the neighbors in their friendship. The scene is set by the routine of two neighbors who are constantly mending the wall that separates their properties. The theme of the poem is about two neighbors who disagree over the purpose of the wall. Not only does the wall act as a divider in separating estates, it also as a barrier in the neighbors' friendship, separating them as well. The neighbor with the pine trees believes that the wall has great significance. He believes that the wall provides a sense of privacy and security. ...read more.

The narrator reinforces this assumption, in line 2; he talks of nature gradually destroying the wall. He makes it clear that nature dislikes the wall, because it is unnatural. By the end of line 4, he plainly refers to the size of the holes. The narrator illustrates the wall as having holes that two can pass alongside each other. The poem is a technique within itself, to where Robert Frost uses it to express his ideas. He conveys a literal representation of building walls; but there is a stronger metaphorical meaning also, which reflects the attitudes of people, towards others. The metaphorical meaning continuously shows a sense of security and comfort by the social barriers that people build, in belief that barriers are a source of protection. This relates to most of the world today. People continuously 'build walls' to block others from coming in, or invading their privacy; which makes people less vulnerable to their fears. Frost also uses figurative expressions in "Mending Wall" as well, to describe the relationship that the neighbors share. ...read more.

While repairing it, they spend time together, and they improve the relationship that is between them. This representation clearly explains what Frost is trying to reveal when saying "Good fences make good neighbors," (45). This line backs up the meaning of the poem and shows the connection that the neighbors share with the wall; all in all, it ties the entire poem together. In "Mending Wall," Robert Frost describes every detail of the poem, making it interesting and imaginable. He leaves the reader to decide what to take from the poem. Whether the wall should be there or not, and whether is represents something more meaningful than just a wall. "Mending Wall" expresses not only physical means, but is places moral views on cooperation, sociability, and kindness to the reader. Frost offers no answers, and he gives the reader lead way by not moralizing but demonstrating. He demonstrates the conflict with people, and shows that people should have more interactions with one another. By the end of the poem, the reader learns that Frost emphasizes that people should not put up walls to run away from their everyday life. ...read more.