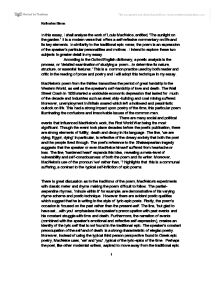 In this essay, I shall analyse the work of Louis MacNeice, entitled, The sunlight on the garden. It is a modern verse that offers a self-reflexive commentary on life and its key elements.

In this essay, I shall analyse the work of Louis MacNeice, entitled, 'The sunlight on the garden.' It is a modern verse that offers a self-reflexive commentary on life and its key elements. In similarity to the traditional epic verse, the poem is an expression of the speaker's particular personalities and motives. I intend to explore these two subjects in greater detail in my essay. According to the Oxford English dictionary, a poetic analysis is the process, or 'detailed examination of studying a poem...to determine its nature, structure, or essential features.' This is a common practice used by both reader and critic in the reading of prose and poetry and I will adopt this technique in my essay. MacNeice's poem from the thirties transcribes the period of great hardship in the Western World, as well as the speaker's self-hardship of love and death. The Wall Street Crash in 1929 started a worldwide economic depression that lasted for much of the decade and industries such as steel, ship-building and coal mining suffered. Moreover, unemployment in Britain soared which left a hollowed and pessimistic outlook on life. This had a strong impact upon poetry of the time, this particular poem illuminating the confusions and irresolvable issues of the common man. There are many social and political events that influenced MacNeice's work, the First World War being the most significant. ...read more.

This is a characteristic in, 'The Sunlight on the garden', where the work's title immediately evokes a simple image of beauty, nature and hope. The first line however, immediately transposes one's expectations as MacNeice's speaker descends into a metaphysical state of suffering, 'sunlight...hardens and grows cold.' Moreover, the imagery of Egypt 'dying' also reveals the somewhat macabre state of his vision; absent in love, emotion and feeling, 'hardened in heart.' MacNeice's vivid poetic imagery such as the line, 'nets of gold', arouses our senses and evokes the speaker's pure and simple vision. Furthermore, the imagery of, 'birds' and 'flying' appeal to not only our sense of sight but also to the speaker's hope for freedom. However, on a meta-level, again our understanding is transposed as the imagery of 'Cage' and 'net' enforces not freedom but a sensation of being trapped and confined in one's self. In addition to imagery, another dominant characteristic of MacNeice's poem is rhyme. The rhyming scheme follows the same pattern (ABCBBA) in each stanza. The partial-serpentine rhyme of the poem acts as an enjambment, the syllabic meter from the previous line being carried to the next. This is again similar to the continuity of time and death that the poet discusses. The enjambment of the first line in the poem follows a rhyming word which then follows another rhyming word ('garden hardens...cold'). ...read more.

At first glance, there is little political reference in the poem, something that one would not have expected, particularly at a time of economic turmoil and war. However there is a strong implication on our philosophical understanding of love, life and fate. The phrase 'we cannot cage the minute', for example, highlights the delicacy and futility of time that not even the speaker can stop or control. This in turn, highlights the vulnerability and weakness of man who has no control over fate, despite 'the nets of gold'. This weakness of man represents a nation under threat with the foreboding threat of another war, and the future economic difficulties in the thirties. There might also be a political implication in the line, 'We cannot beg for pardon', relating in my mind to the horrors and mistakes made in the first word war. In conclusion, the poem, 'The sunlight on the garden' written by Louis MacNeice, is a typical lyric-epic poem focused around love, loss and time. There are many other themes (the speaker's gender for example) and aspects the poem's structure that I could have looked at in greater detail, rather than focusing solely on imagery and rhyme. The poem educates us about the importance of time and the growing shift occurring in epic poetry, a movement which MacNeice evidently took part in and which in turn affected the evolution of poetry in the twentieth and twenty-first centuries. ?? ?? ?? ?? Katherine Binns 1 ...read more.