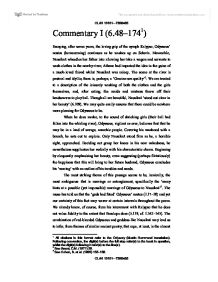 Commentary I (6.48-1741) Escaping, after seven years, the loving grip of the nymph Kalypso, Odysseus' nostos (homecoming) continues as he washes up on Scheria. Meanwhile, Nausika� wheedles her father into allowing her take a wagon and servants to wash clothes in the nearby river; Athene had imparted the idea in the guise of a much-loved friend whilst Nausika� was asleep. The scene at the river is pastoral and idyllic; there is, perhaps, a 'Grecian-urn quality'2. We are treated to a description of the leisurely washing of both the clothes and the girls themselves, and, after eating, the maids and mistress threw off their headscarves to play ball. Though all are beautiful, Nausika� 'stood out clear in her beauty' (6.109). We may quite easily assume that there could be nowhere more pleasing for Odysseus to be. When he does awake, to the sound of shrieking girls (their ball had fallen into the whirling river), Odysseus, vigilant as ever, believes first that he may be in a land of savage, anarchic people. Covering his manhood with a branch, he sets out to explore. Only Nausika� stood firm as he, a horrible sight, approached. ...read more.

Such an attitude will be required to its greatest degree when Odysseus returns home, slowly identifying himself to those closest to him (e.g. 16.187-212). Our passage, then, explicitly contains little more than Odysseus discovering Nausika� and her servants in what seems to be an exotic utopia, allowing him to reach her parents and consequently be escorted home. On further inspection, one may note how the strife in Ithaka is contrasted well with the harmony of Phaiacia. Further, one's appreciation of the poem may be increased by certain subtexts and themes that I have argued lie underneath the narrative: these motifs arguably give this scene its true depth and sense of unity with the rest of the poem. Commentary II (2.35-145) The passage opens with Telemachus taking the sceptre to speak in the assembly. In response to Aigyptios, Telemachus tells us that it was he who called the assembly, there is no enemy advancing and the matter is 'business of his own' (2.40-47). We know, however, that it was Athene (positioning herself as Telemachus' mentor in the guise, for now, of Odysseus' friend Mentes) who told Telemachus to call an assembly in her earlier visit to him; it was at this time, also, that she ordered him to thereafter journey to Pylos and Sparta (1.270-288). ...read more.

He is the most vocal and imperious, and via his and words, and actions, we are therefore most clearly incited to hate them. This groundwork arguably allows for later, more subtle, characterisation of the suitors: for example, Amphinomus may be seen as a more nuanced, ambivalent figure, who is not wholly malevolent (e.g. 18.124-126). To conclude, one could see this passage, and book 2 as a whole, as adding little to the narrative. In one sense, that view holds weight: Telemachus still goes on to take the trip that was planned for him, by Athene, in book 124. However, in another sense it certainly does not: Telemachus' maturation requires this scene, emerging from his childhood timidity showing the rumblings of boldness that will later be instrumental in his relationship with his father (on whom, ultimately, the poem is focused) as they regain control of both the family house and kingdom. The assembly also elucidates many of the complex and multifaceted relationships in Ithaka; the audience is now able to track their subsequent development or, like Penelope and her love for Odysseus, constancy. This passage may not be seen as the most enthralling part of the narrative, but its reverberations can definitely be felt greatly through the poem as a whole. ...read more.