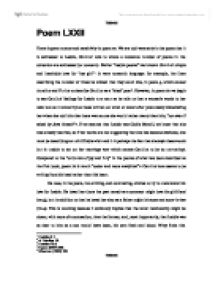 Poem LXXII There is great nuance and sensitivity in poem 72. We are told very early in the poem that it is addressed to Lesbia, Catullus' love to whom a moderate number of poems in the collection are addressed (or concern). Earlier "Lesbia poems" had shown Catullus' simple and insatiable love for "my girl"1 in very romantic language: for example, the lines describing the number of times he wished that they could kiss, in poem 5, which caused Aurelius and Furius to describe Catullus as a "sissy" poet2. However, in poem 70 we begin to see Catullus' feelings for Lesbia turn sour as he tells us that a woman's words to her lover are as trustworthy as those written on wind or water after presumably disbelieving her when she told him that there was no one she would rather marry than him, "not even if asked by Jove himself"3. If we assume that Lesbia was Clodia Metelli, we know that she was already married, so if her words are not suggesting that she has become available, she must be describing an unfulfillable wish and it is perhaps the fact that she says these words but is unable to act on her marriage vow which causes Catullus to be so untrusting4. Compared to the "outbursts of joy and fury" in the poems of what has been described as the first book, poem 72 is much "cooler and more analytical"5: Catullus here seems to be writing from his head rather than this heart. ...read more.

It is by means of literary effects such as these that Catullus manages to express the almost inexpressible nuance of his emotion. This poem, ultimately, is most successful when read as part of the collection, as one can then draw links between the subtle issues in the "Lesbia poems" and see the complex web of emotions that Catullus paints for us. The development from a romantic, devoting relationship between Lesbia and Catullus to the trauma of that relationship breaking down is fascinating, and may reflect the emotions of millions of people alive today in similar situations. Poem XLII This poem is perhaps most interesting because it in itself can be seen as an imitation of the Roman practice of flagitatio10, which was a form of popular justice involving a crowd surrounding the man suspected of wrongdoing (or his house) whilst shouting 'roughly rhythmical phrases' in unflattering language, demanding redress11. This was a very effective tactic because in a small community fear of defamation was strong; though it did, of course, rely on having friends willing to engage in the practice in order for what was seen as justice to be done. In this case, Catullus tells us that the crime was the theft of a notebook and the subsequent refusal to return it12. We can only speculate about the girl who stole them (though it has been inferred from the fact that she is described as an 'adulteress'13 that she may well be Lesbia) ...read more.

In poems 41 and 43, however, we are not shown any consequences of Catullus airing his opinions. We are simply told, in each, that there is an ugly girl in whom he is not interested: there is not intended to be the nuance and comedy value that poem 42 contains. To conclude, Catullus' adopting the form of flagitatio for this poem 'underscores the poet's association with the traditional purposes and values inherent in Roman invective'17; not only does he derive authority from the tradition of the technique, but it also allows him to attack her harshly and eloquently. However, ultimately, he couldn't force a blush from, in Catullus' words, the "brazen bitch-face". We, therefore, see the limitations of invective: perhaps Catullus is admitting to us that we should see it as little more than entertainment. More importantly, though, the twist at the end of the poem is of stylistic and comedic value and can, perhaps, be said to show Catullus' eloquence. Moreover, the fact that he feels no qualms at using such openly offensive language can be attributed to the fact that Romans would surely have sympathised with his demands for justice in face of a thief and may, also, be a reflection of his superior social status (not to mention the lower regard with which women were held generally) and consequent security in his right to show his anger in whatever way that he pleased. Ultimately, the poem makes character assassination into an appealing and technically adept art. ...read more.