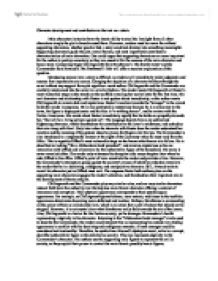 The handmaids tale - Character development and contribution to the text as a whole.

Character development and contribution to the text as a whole Main characters in stories have the innate ability to steal the limelight from all other characters simply the plot is based around them. However, readers must be aware the without supporting characters, whether good or bad, a story could not develop into something meaningful. Supporting characters guide the plot, reveal themes, and most importantly contribute to characterization of main characters. One could argue that supporting characters are more important for the author to portray accurately as they are essential for the success of the main character and hence story. Comparing Roger Chillingworth from Hawthorne's The Scarlet Letter and the Commander from Atwood's The Handmaid's Tale will offer a succinct explanation of this question. Introducing anyone into a story is difficult, as readers will immediately make judgments and assume first impressions are correct. Changing the depiction of a character halfway through the novel without any support from plot signifies a weak author. Chillingworth and the Commander are carefully intertwined into the novel in a similar fashion. ...read more.

This is arguably Offred's most vulnerable stage as she knows what horror is to follow. He is described as looking "like a Midwestern bank president", and remains mysterious as has no interaction with Offred and is known to be the authoritative figure of the household. His name is never revealed either. The reader only witnesses his deceptive side many chapters later when he asks Offred to his office. Offred's point of view constricts the reader and provides a bias. However, the Commander's attempts at going against the society's values of which he embodies reveals to the reader that he is a deceiving, ambiguous, and manipulative character. Still, Atwood waits to reveal his character just as Offred must wait. The suspense factor both authors place on the supporting male characters engages the reader's attention, and foreshadows their important role to the development of theme and plot. Chillingworth and the Commander play very similar roles, and are very similar characters indeed. Both have the authority over the helpless main female character offering a contrast of innocence and corruption. ...read more.

Chillingworth knows Dimmesdale's and Hester's secret, which is eventually revealed to the public out of Chillingworth's doings. He provides the climax of the novel. Then, the secret meetings between Offred and the Commander eventually lead to her escape as she grows stronger knowing more and more about the Commander. These despised characters also allow for the reader to place blame for the tragic circumstances the females are in. Rather than blaming the society, the reader can pinpoint one person because they interact with the main character the most and cause the greatest despair for them. No matter how much a character is despised, he/she is there for a very important reason. The supporting characters are just as important to a novel as the main ones, and should never be taken for granted. The progression of The Handmaid's Tale and The Scarlet Letter obviously would not be the same without these ruthless characters. Society itself is not sufficient to play the evil role to contrast with the goodness of a novel. It is interesting to note that the striking similarities between Chillingworth and the Commander can also be seen in the fact that the same actor plays both roles in the adapted films. ...read more.