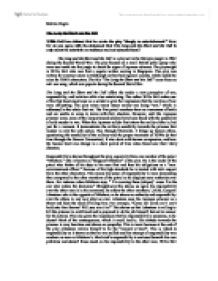 The Long, the Short and the Tall

An example of this is shown when the Japanese prisoner is asked a question he puts his hands on his head and looks completely lost and misunderstood. This suggests that he doesn't understand and is funny however; it gradually makes you feel empathy towards the characters when they are in tense situations. All of these devices are used to educate an audience too, because Willis Hall uses realistic soldiers to show us the overview of War and what the soldiers went through. For example the soldiers all come from all over the United Kingdom, Bamforth: London, Macleish: Scotland, Whitaker: England, Evans: Cardiff, Smith: Newcastle. These men represent the typical United Kingdom army of the time. Willis Hall did this again to bring you closer to the play, so that you feel more and more involved as the play goes along not only to entertain an audience but also to educate them at the same time. Willis Hall had a political motive for naming the play after an anti-war song. This makes the title ironic because it's taken from a song, which was popular during the Second World War. ...read more.

Although some humor was put in the play for example, when the soldiers were making fun of women's magazine and when the Japanese solider is asked questions he puts his hands on his head and looks completely lost. This suggests that the play is realistic, which is entertaining because humor plays an important role for the audience, as that is what brings the play to real life. However, the play is to educate an audience because the play introduces realistic characters, which represent the typical United Kingdom army of the time. Willis Hall emphasizes on the situation rather than the plot or people, which suggests that he wants to show the audience what the soldiers faced, the hard work, which was distressing and extremely painful to live through. The purpose of producing this play for an audience was to give them an idea of how things would have been if they were in the war surrounded by these characters and in these similar situations. So therefore, Willis Hall did have a motive and hidden agenda behind the play as it was done purely to entertain an audience as well as educating them at the same time. Sabrina Bagria ...read more.