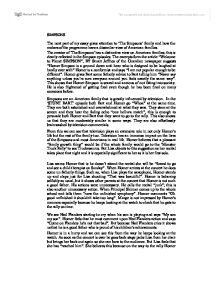 'The Simpsons' family and how the makers of the programme have a dissimilar view of American families.

SIMPSONS The next part of my essay gives attention to 'The Simpsons' family and how the makers of the programme have a dissimilar view of American families. The creator of 'The Simpsons' has a distinctive view on American families; this is clearly reflected in the Simpson episodes. The excerpts form the article "Welcome to Planet SIMPSON", BY Stuart Jeffries of the Guardian newspaper suggests "Homer Simpson is a ground down anti-hero who is designed to be laughed at hardly ever with" Homer is a conformist and says "I am not popular enough to be different". Homer gives Bart some fatherly advice to Bart telling him "Never say anything unless you're sure everyone around you feels exactly the same way". This shows that Homer Simpson is scared and anxious of not fitting into society. He is also frightened of getting fired even though he has been fired on many occasions before. Simpsons are an American family that is greatly influenced by television. In the 'STUNT BART' episode both Bart and Homer go "Whoa" at the same time. They are both astonished and overwhelmed at what they saw. They stare at the screen and they hear the fading echo "one helluva match", this is enough to persuade both Homer and Bart that they want to go to the rally. ...read more.

He carries on by saying "Now a lot of people are gonna be telling you that you're crazy, and maybe they're right" he continues. This makes even more determined because he looks up to Lance Murdoch and wants to follow his advice as he feels it is the right thing to do. Even Homer can't make him change his mind. When Homer learns of Bart's challenge, Homer tries to stop him the beast way he can by simply shouting at him "I forbid you to jump over that Gorge", "Go to your room". Bart's rebels but Homer says, "I can and do". Homer is satisfied and says, "I'm glad someone's put an end to all this nonsense". Bart's reply to this is "You can't watch me 24 hours a day, as soon as your back's turned, I am grabbing my skateboard and heading straight towards that Gorge". This shows that Bart is rebellious and that his parent's authority doesn't usually affect his decisions, he sees Homer as a weakling and ends by saying "There is nothing you can do" quite confidently. Homer starts to cry and says "There's nothing we can do he's a goner". This shows Homer is not experienced at handling difficult situations involving Bart. ...read more.

Bart always uses bad language throughout each episode. Bush may also find The Simpsons inappropriate as they review the school as an unpleasant place to be. This is shown through various episodes when many people even Bart have often experienced bullying. It shows intelligent Bart Simpson and Nelson Muntz often bully characters like Martin Prince. We also see Homer not trying to gain promotion he is quite satisfied with his position and job. He doesn't really want to get to a higher level, as he knows he hasn't got the qualities or qualifications to and also because he is lazy and doesn't want to work any harder than he has to. The Simpsons family also has unhealthy pastimes or lifestyles. For instance Homer is often hanging out at Moe's Tavern. He is constantly consuming unhealthy food like Donuts and drinking endless cans of Duff Beer. He enjoys all this eating and drinking and is not at all ashamed of what he does. This shows that the community of Springfield is an overall unhealthy environment. Homer is also frequently strangling Bart by the neck. The Simpsons are more acknowledged and accepted than The Waltons because they represent a more typical American way of family life with everyday issues. Therefore, I prefer the Simpsons family as they are more realistic, whereas the Walton, though their set is realistic - the attitudes to life and family is not wholly accurate. ...read more.